PONTIAC G6 GXP IS SO UGLY

No, it didn’t just dawn on me, but it hit with aluminum bat force more recently. Pontiac released its G6 sedan to much fanfare on the Oprah show a few years ago. Along came a hardtop convertible and coupe. Although never a fan of the G6 in general, the highest-performing G6 coupe finds humiliating ways to offend; ways that you wouldn’t expect the builder of the now-classy Cadillac CTS, reputable Corvette Z06, or clean and cool Malibu to make use of.

Bob Lutz, the senior product mastermind at General Motors, declared that Pontiac should be a value-driven American BMW-type automaker. To do so, he suggested earlier this decade, Pontiac design needed to be stripped of excess gaudiness. Cladding, unbecoming scoops, hideous spoilers: they all had to go.
Apparently they didn’t. The proof is in the pictures. Officially, on behalf of GoodCarBadCar.net, apologies…. many, many apologies, for exposing your eyes to this ‘car’. 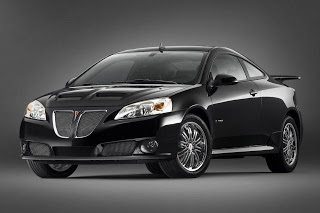