1996, ’97, and ’98 were Porsche’s years whilst 1999 was BMW’s.  The most recent French company to win was indeed Peugeot, but that was 1993.
Thus, Peugeot is ready to battle again.  This year, they’ll be majoring on the drivers as seriously as the cars.  Ask any casual Le Mans follower about previous winners and you will inevitably be told about car companies; not drivers.  If Peugeot manages to wrest the Heures du Mans crown from Audi this year, the drivers will be remembered.
Jacques Villeneuve, Christian Klien, Alex Wurz, Pedro Lamy, Franck Montagny, Marc Gene, and Ricardo Zonta all sound good.  World Rally man Stephane Sarrazin and ex-Formula 3000 racer Nicolas Minassian should help the cause.  For those keeping track, that’s three Frenchmen, one French-Canadian, and not a single German. 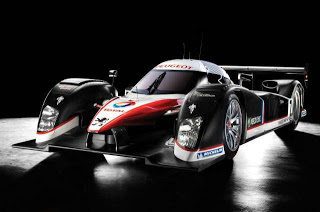 Peugeot’s current showrooms are not full of models that could be easily linked to a win at Le Mans.  Like Audi (which uses lines like, “Audi is a trailblazer when it comes to diesel power. Since 1989, over 4.5 millions cars have rolled off the production line with the highly efficient TDI technology under the bonnet. By equipping the R10 TDI sports prototype with this technology, we have just won the 24 Hours of Le Mans with a diesel-powered car for the second time”) Peugeot is opting for diesel power in their Le Mans racer and it is on this point that Peugeot can claim ‘trickle-down’ effect and exercise marketing heft. Peugeot and its sister company Citroen are indelinly linked to diesel engines, and rightfully so.