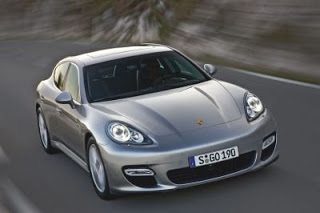 Porsche has announced that its Panamera sedan will have power outputs ranging from 300 to 500 horsepower. Power will be sent to all four wheels at the top of the range as standard equipment but will be optional elsewhere. Six-speed manual transmissions or the PDK dual-clutch gearbox will harness the engines’ prodigous power. According to the German sports car and SUV maker, the Panamera four-door is wider and lower than comparable models. Information regarding a Panamera hybrid will be released in the spring of ’09. Porsche dealers will receive their first Panameras next summer.

Them are ‘da facts. Now for the fiction. The phrases below are direct from Porsche.
“The unmistakable, sleek GT silhouette….” No, it was a big mistake and it isn’t GTesque. Take a look at the Aston Martin Rapide for a GT silhouette.
“Through its design language alone, the Panamera will establish a new segment versus the competition.” Actually, this is true. The new segment will be for ugly competitors in the four-door coupe arena.

“The elegant roof arch extends stylishly over the generous interior, begging the beholder to get inside.” This isn’t a lie, it’s simply an error. Porsche has been misled by the focus groups. The only thing begging this beholder to get inside is that I know it is a Porsche and will drive amazingly well. Elegant roof? Funny joke, Porsche. Extending stylishly? Okay, that’s not even funny.
The Good Car Guy is showing Porsche’s two best Panamera angles and the two worst. Decide for yourself which photos belong in which category. It must be pointed out that “two best” really means “two not-as-wickedly-ugly-as-the-others”. 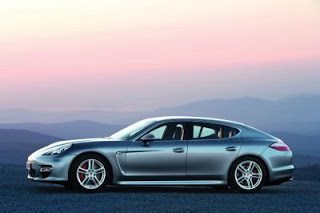