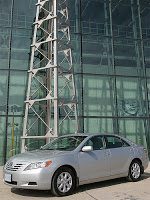 Kia is selling to fleets at an increase of 60% this year. Nissan – 45%. Toyota? 30%. Why is this the case, why is it far more likely that your next trip to Enterprise will result in a drive-away in a Camry, rather than an Impala?

For just that reason – the car could be a Camry or Altima because times have changed, and it isn’t nearly as likely in 2007 that your rental will be an Impala or a Taurus (nee Five Hundred nee Taurus).

GM and Ford have dropped production that was previously thrust at rental companies and government by over 120,000 units this year already. It’s always “units” when it comes to fleet sales. No emotion, no passion. Units. Ugly units.

Prices of rental cars are up more than 20% in the last two years as a result of GM and Ford de-competing and the rental companies needing to find new ways to get the stuff, the units, they need. The point? Resale values – residuals – are rising for Ford, Chrysler and General Motors products. Constantly providing sustenance for rental companies erodes the brand.

Great short-term profits; meet the UAW and CAW demands by keeping the factory doors open and all shifts running; and it can cause a pain during yearly, rather than quarterly, profit announcements. You’re selling the cars for less because you’re selling more cars.

Meanwhile, The Good Car Guy sees that your car is all over the Avis lot and safely assumes that those units can’t sell on a dealer’s lot. Then The Good Car Nation is informed, and it all goes to rubbish.

So as Kia desires 12-15% of their sales to be fleet, Ford still sold 199,000 fleet vehicles in the first three months of ’07. 33% of Fords, Lincolns, and Mercury’s were to fleets, 16% of total F/L/M sales were to daily rental companies. Times are changing, but things are still somewhat the same.

The people of China do not like buying on credit. And despite their booming automotive market, only 10 percent of car sales in China are bought with money people do not have. The rest of the world? Between 30-40% of sales go to people who think wealth during poverty, rather than the Chinese thinking, “One must think of poverty even when wealthy.”

Carmakers desperately want to change that ideology, and thereby increase sales. So Mercedes is heavily advertising the E280 for 280 yuan ($36USD) a day for 3 years, with 30% of the total on the salesman’s desk.

Fiat’s net income doubled in the first quarter of 2007. One of the world’s preeminent small-car producers, Fiat had eaten itself into trouble. A $2 billion gift from General Motors – for NOT buying Fiat – helped their cause. The changing tides have been orchestrated by Sergio Marchionne, which is a very cool name. Fiat shares have risen over 80% in twelve months. Check out the next Fiat 500, the Cinquecento, as we Venicians say.

Buick debuted a concept Riviera in Shanghai. Buick is shouting, and rightfully so, “Long live the Chinese automotive dream!” China loves Buick. I once picked up a Chinese friend in my brother’s old car. James had recently immigrated to Canada.

When we got out of the car, he asked, “What kind of car is this?” I replied, “Buick Century.” He was in raptures, “I really really like this car, a very nice colour.” It was a beige Buick Century.

China loves Buick. And the Riviera concept (right) is nice to look at, as is the Enclave, I must say.