6 – Ratios in the Pontiac G8’s transmission.

2.3812 – x in the equation of how much extra horsepower the Shelby GT500 possesses in contrast to the Mustang V6.

3 – vehicles in Citroen showrooms with three-row seating, only 1 of which is remotely SUVesque.

2 – vehicles in Renault showrooms with three-row seating, neither of which is remotely SUVesque.

2 – vehicles in Peugeot showrooms with three-row seating, only 1 of which is remotely SUVesque. 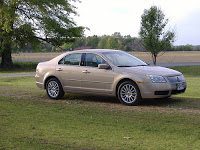 the second Alpina-tuned model officially sold by BMW in the USA.

4.4 – seconds required for Audi’s ‘slowest car’, the R8, to reach 60mph. Audi’s UK ad campaign regarding the ‘slow’ R8 is in reference to its painstaking build process, the slowest of any Audi.