Despite the fact that you put your complete trust in me, The Good Car Guy, to help develop your car opinions; assist in your vehicular decisions; and keep you up

to date with all automotive abominations – you do need to drive cars for yourself.

Reading about cars, trucks, sport-utes, vans, and crossovers has helped me a great deal. As far as the Nissan Versa goes, however, other members of the auto press have let me down. They’ve laid out their impressions, performed their testing procedures, and offered them up for me to read. But, Nissan’s latest small-car is better than what you and I have been led to believe.

Here’s another but. The Versa is not better than expected in the way a BMW 335i exceeds expectations. It does not over-perform like a new Hyundai Veracruz. Nope. I was told the Versa was ugly, cheap, and boring. It is ugly. It is boring. But it isn’t actually all that cheap. The BMW is even faster and smoother than expected. The Veracruz is even more luxurious and Lexus-like than you could have imagined. The Versa? Well, it’s not nearly as chintzy you reckoned. 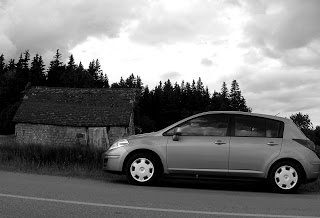 The Good Car Girl and I were scheduled for two trips to Prince Edward Island with departure dates from our home only eight days apart. The odometer of the Versa showed 748 kilometres upon return to the capital of Nova Scotia. The climate was dreadful – the Versa had little tanning opportunity on PEI beaches. Front and rear screen wipers were well tested. The rear wiper was particularly worthy of celebration.

Another positive which was unable to miss: Abundant space. In the front and rear passenger holds as w

ell as the cargo bay, accessed via the rear hatch. Granted, this car – Nissan’s small car in North America – is taller than Nissan’s own midsize Altima. Space isn’t everything, but do remember, Nissan’s ‘bigger’ Sentra only offers four more cubic feet of interior space.

The Versa’s 122 horsepower is class competitive, in a class that includes the Chevy Aveo, Honda Fit, Toyota Yaris, Hyundai Accent, and Kia Rio. All of which are hundreds of pounds lighter. A typical on-ramp sequence goes like this: hyper throttle tip-in causes me to think we’re accelerating quickly; I soon discover the 4-speed automatic transmission is sapping power as second gear slushes in; we are still approaching 80km/h at a decent pace; Christmas will come sooner than 110 km/h. 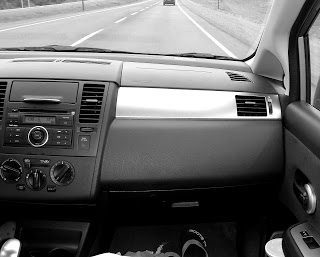 Put it this way. As compared to Yaris, Fit, et al; the extra torque and horsepower provided by Nissan’s 1.8 litre four-cylinder is a nice benefit when accelerating from city stoplights. Once we arrive at a cruising highway clip though, 122 bhp being sent to the front wheels via a power-sapping automatic can’t overcome 2700 pounds. So, the + is decent city acceleration. The big minus is pitiful highway passing power. Pitiful.

Back inside the car, most switches and controls impressed for such a low buck automobile. The steering wheel was one of the nicest in a sub $20K car I’ve ever experienced. Seating material is an initially impressive faux suedeish stuff. Initially impressive? Just. It looks expensive. But then friction causes your denim or khaki to cling to the junk when you simply wish to slightly rearrange your position. Insert *scream* here.

For a 5’2″ female, the pedal positioning was apparently ‘perfect’. Perfect, she said? Perfect? For a slightly taller-than-average male with size 11 shoes, pedal positioning was abysmal. The go-pedal was so close to the floor that only my toe could thrust the car forward. That’s ankle twisting stuff. The brake pedal, in contrast to the throttle, was perched at a decent height. But it is so much closer to the driver than the gas that each switch from go to stop involved a thigh pullback on the ultra-cling seats. Place next *scream* here.

Screaming done. The off-ramp from the Trans-Canada towards the Dieppe Airport in New Brunswick was a wide, sweeping right hander which showed the true dynamic plight of the Versa. Understeer. What small front-driver doesn’t understeer? There was some vibration coming through the wheel and pedals, but the flip side was a speck of feel. Feel? I thought I said this car was boring. And GCBC never attaches feel and boredom.

Feel is limited. The boredom stems from ugliness on the outside, the dark palette inside, the inability to quickly pass slow-moving traffic, and expected outside front wheel plowing. The Versa faces two strong competitors. Nissan’s own Sentra is not too high up the pricing ladder and offers more ‘prestige’, if that’s what you call that trait at this level. The Honda Fit is another surprisingly spacious small hatchback with stronger on-road dynamics.

The Versa is versatile. No doubt about that. It is also extremely capable in the daily grind of chores, errands, and commutes. Nevertheless, what do young; hip; urban; first-time buyers want? Fun. Nissan locked up the fun inside the 350Z. 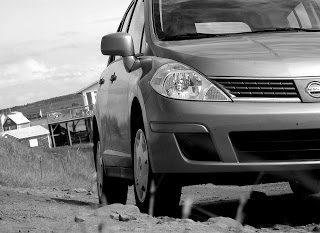