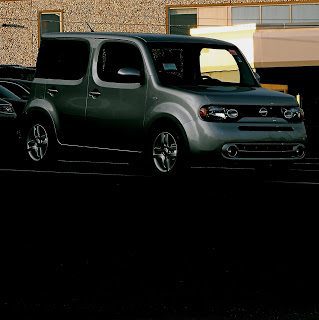 Reports began to surface on Twitter yesterday that other Hypercubists from the Hypercube.ca competition (in which The Good Car Guy has partaken as one of 500 with a chance to win 50 Nissan Cubes) that Cube arrivals had begun. One quick phone call to my local Nissan dealership revealed that, yes, Cubes had arrived but were still on the truck.

At the end of the day, The Good Car Girl and I arrived at O’Regan’s Nissan for a viewing. Wow. Admittedly, the bias here is huge. GoodCarBadCar was officially pro-Cube long before Nissan even decided that the Cube should come to North America. The possibility that I could win a Cube and make it the first GoodCarBadCar.net long-termer has only heightened the excitement. 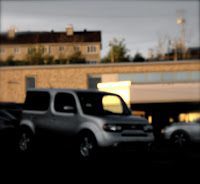 Of course, it’s the interior space that knocks you over first and foremost. Sure, the Cube is a good-looking vehicle that appeals to buyers in our demographic. But the quality of the interior, along with its maneuverability and excellent ergonomics, place the Cube in solid territory above the small-car norm. We dealt with an excellent sales rep who knew full well that we weren’t buyers but still revealed himself to be the kind of guy from whom we’d wish to buy a car. I turned on… or rather pushed on (with keyless push-button start) the Cube to listen to its tiny four-cylinder purr. We flipped and folded the rear seats, inspected the cupholders, and did the walkaround numerous times.
The silver Nissan Cube seen in pictures here (click to enlarge) was a 1.8SL model. In Canada, the SL starts at $20,698. It can be optioned up with the $800 Tech package. For a fairly well-equipped model, the 1.8S at $16,998 is a screaming value. The continuously variable transmission can be added to that model for $1,300. Nissan Canada’s Build Your Own site is up-and-running for the Cube, finally.