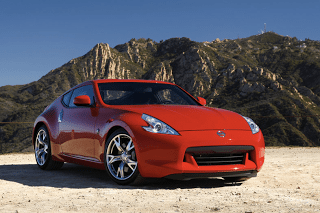 With a history dating back forty years, the Nissan Z is a known quantity. Also well known are the Z’s positive characteristics: powerful engines, spirited dynamics, provocative styling, and value-driven prices. Okay, the Nissan 370Z isn’t an inexpensive car. When measured alongside similarly capable vehicles, however, it’s the Z that offers the most for the least.

Unlike the 350Z, the Nissan 370Z comes across as a much more refined sports car. Noise, vibration, and harshness have all been reduced. The clippity-clompity once heard (and felt) by 350Z owners on rough roads is nearly absent from the proceedings. Fortunately, the Z isn’t growing soft in its old age. This is a high-performance car; capable of tackling a track at a moments notice and setting a better time than the otherwise excellent Hyundai Genesis Coupe or the sublime Mercedes-Benz SLK350.
All this happens to sit well with the 370Z’s improved design. Nipped here, tucked there – the Z is a tauter version of its old self. Nissan has given the Z such a strong rear-wheel drive stance; it looks about as fast as it actually is. The place where you’ll while away the hours has been improved, too. What’s not to like? Perhaps only the fact that Nissan’s ability to steadily improve the Z means something even better this way comes.
—–
Engines: 332 horsepower; 270 lb-ft of torque from a 3.7L V6
Base USD Price: $29,990
City Mileage: 18-19 mpg
Shrinking: Weighing in 107 pounds lighter, measuring 2.6 inches shorter from nose-to-tail and a hair shorter at the roofline; the 370Z is in better fighting shape than the old 350Z. The acceleration benefits of an increase in power and a decrease in weight are obvious. Slight improvements in fuel economy aren’t so bad either. Besides, with a bit extra in the hips, the 370Z looks better: ya know that whole longer/lower/wider thing? It works.
CLICK HERE FOR THE GOOD 12 v3.0 PART VII
CLICK HERE FOR THE GOOD 12 v3.0 PART IX