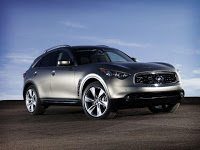 The past is now forgotten.  Infiniti FX in its first incarnation has been written up, read out, and will soon be dismissed.  (If you missed The Good Car Guy’s look back, check it here.)  Infiniti has introduced the new look FX, which, in V8 form, will be a 5.0L, 390 horsepower bruiser.

The overall package is still recognizably FX, a little too much so as far as the shape of the greenhouse goes.  It looks terrific, but a little too same. Infiniti used to harp on about the Bionic Cheetah inspiration. If Bionic Cheetah’s really did look like the old FX, it’s safe to assume the term is fitting for the new FX, as well. Nevertheless, the details are suitably differentiating and lend favourably to the FX50 being considered modern and as stunning as ever.

A typical rundown from your local Infiniti salesperson will include: 50/50 power separation during acceleration, with a switch to 100% at the rear until slip is detected -> A new 7-speed transmission helps Infiniti keep up with the Jones’s, but tech like Adaptive Shift Control and Downshift Rev Matching is more than just fancy terminology -> Navigation, Around View Monitor and Adaptive Front Lighting are all standard equipment -> ‘Distintive side vents’ behind the front wheels, which is starting to sound more ubiquitous than distinctive. 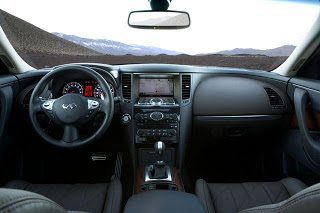 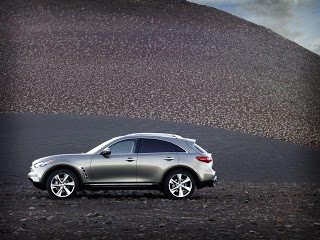