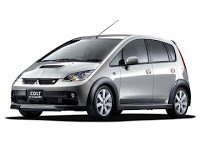 Eleven consecutive months of production growth is music to the ears of Mitsubishi’s top bosses.  Globally, Mitsubishi Motors produced 115,805 vehicles in January.  Mitsubishi exported 29,316 cars from Japan to Europe alone.  The global production figure is 7.5% higher than it was in January of 2007.

The story in Japan is not dissimilar to that of other big Japanese automakers like Toyota and Honda. January of ’08 sales were down 2.3% to 15,165.
Mitsubishi’s vehicle lineup in North America is more than a little different than what you’d see in Mitsu showrooms abroad.  While the Lancer is the smallest vehicle available to us, Mitsubishi UK would sell you an i – yes you read that right – or a Colt (pictured).  If you’re familiar with the decommisioned smart forfour, the Colt is not a completely different animal.  The i would be considered a smart fortwo competitor and will be compared with the Toyota iQ when it reaches production.
North American Mitsubishi buyers can also purchase a Dodge Dakota-based truck (the Raider) and two crossover SUV’s that are not available in the UK.  Conversely, consumers across the pond are offered the L200 pickup and the Shogun sport-ute alongside the Outlander that we can have as well.
In accordance with typical European auto selling, Mitsubishi produces the Grandis.  Picture a Mazda 5 mixed with a Mitsubishi Outlander.  Moving to Japan, well…. follow the link.  Lots of odd shapes, dramatic style, and practical; everyday useability.