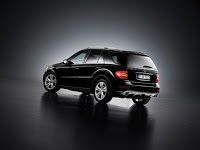 Leaky seals are bad news when NHTSA starts inspecting problems with vehicles. For example, the Mercedes-Benz M-Class has a potentially faulty seal around the rear taillamp assembly. As water gets in, its flow finds its way into a compartment holding the spare tire. This is also where the control unit for the power liftgate is found. One short circuit could equal one fire.

Thus, Mercedes-Benz is recalling 16,130 M-Class SUVs, says NHTSA. The Recall will begin in April, affects ’09 models, and involves dealers replacing the seal around the taillamps and repositioning the power liftgate control unit.