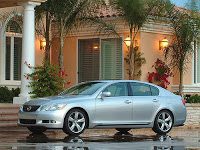 Admit it. Your compassionate inner being was beginning to feel an inordinate amount of, er… compassion toward the poor V8 engine in Lexus’ GS sedan. It’s ok to be forthright. We all build connections with some form of inanimate objects -teddy bears, ice cream, pillows, Lexus sedans.

What’s the difference? If you were one of the inhumane persons who knew not of the GS’ plight, let me make you aware. Lexus/Toyota builds this wickedly sweet V6. Capable of pumping out up to 306 horsepower and 277 lb-ft of torque, the V6 outshone Lexus’ old V8 by a fair dose of extra shine.

That 4.3L V8 had completed its distinguished duty but had not yet received its retirement papers. More weight and more expense, but distinctly less power and speed. Well, news has surfaced.

The 4.3L V8 has been superseded by the V8 from Lexus’ largest sedan. That’d be the LS. The LS, as any kind big brother would do, offered up its peerless 4.6L V8 for the GS to use as well. Add 52 horsepower and a helping of torque. No longer must the Lexus GS eight-cylinder wilt under the pressure of an overachieving V6 and a more efficient hybrid. The GS460 can stand on its own two fee…… four wheels, rather.