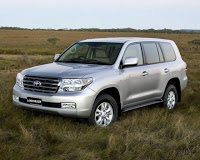 Broadcasters have already informed the world that Motor Trend‘s sport-utility vehicle of the year is the Mazda CX-9. Most of this crossover/utility vehicle’s competitors were like-minded – relatively commodious but not so capable off-road. A vehicle needs to be new or significantly revised to gain entry into Motor Trend‘s SUOTY competition, so past greats like the Land Rover LR3 and Mercedes-Benz GL-class weren’t permitted.

Buick sent the Enclave, Hyundai’s Veracruz performed admirably, Jeep competed with both the Patriot and Liberty, while Land Rover’s LR2 was the only vehicle badged “luxury”, although many compete with luxury-like pricing. The Nissan Rogue, Saturn Vue, Subaru Tribeca, Toyota Highlander, and Toyota Land Cruiser rounded out the field.

Read The Good Car Guy’s review of the Vue after driving it at GM’s Milford Proving Grounds
The Land Cruiser was the most expensive, most powerful, heaviest, and quickest vehicle in this year’s event. Toyota’s brute also towed more than any other entry and guzzled fuel on the highway at the highest rate. It’s not surprising that the big Toyota emits more C02 than all comers. Unfortunately, despite its girth it doesn’t hold the most or rise to the top of the “people miles per gallon”. Interestingly, of all 11 combatants, the three other off-road capable vehicles were all slower around MT’s figure-eight course. Here are the numbers: