LACROSSE – THEN AND NOW

Larry Edsall’s ‘Concept Cars’, a book I received for Christmas, features a brief look at the 2000 Buick LaCrosse concept.  Had the LaCrosse hit production with the exterior of that ’00 concept, we’d have considered it controversial but beautiful.  “Can Buick really sell such an overt and audacious vehicle?”, the motoring press would have queried.

Those questions would have arised amidst many compliments – directed at GM for its willingness to take a risk, at Buick designers for drawing on history and looking to the future – and the LaCrosse would have been a roaring success or a complete flop.  Rather than the 2000 LaCrosse, we have mediocrity.  And forgettable design.
The LaCrosse, known as the Allure in Canada (because of awkward connotations!? Lacrosse is Canada’s national sport) is forgettable itself.  Cross-shopped with the Chrysler 300, it appears weak.  Contrasted with the Honda Accord, it seems to lack connection with the driver.  Contrasted with the Buick Enclave, it comes across as half-a-Buick.  At the time, the LaCrosse concept was heralded by Buick’s general manager as the latest evolution of the classic American sedan.  Roger Adams said that the “LaCrosse is a realistic vision of a potential future Buick flagship vehicle…”, but if so, what does that make the production LaCrosse?  The latest devolution of the classic American sedan?  C’mon Buick – we anxiously await the day we can see Enclaveness affect the rest of the brand. 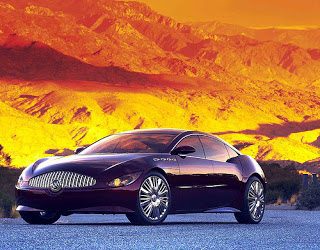