The editor responsible for Kia BUZZ, as talked about on GCBC yesterday, is attempting to fix the problems on that site as soon as possible. It seems the problems may be browser related. Check out Kia BUZZ here.

Audi’s spectacular R8 will see the power increase we all knew was coming. Two turbos affixed to a V10 should be tire-shredding enough for any power hungry Audiphile. In fact, we all should have a nice family sedan or Avant, along with a sporting car. So Audi will supply the RS6 and R8 with a 5.2L V10 producing 530 horsepower should satisfy us regular folk.

For those prospective American customers who paid Roger Penske 99 bucks to reserve their smart fortwo and for those who didn’t: the rest of the pricing scheme has been announced. That’ll be $11,590 for the base, $13,590 will take you up a notch, and a well equipped cabrio at $16,590. ‘pure’ is bottom-of-the-line, ‘passion’ is a very comfortable trim level. The American smart will use a 71-bhp 1.0L three-cylinder. I was an early driver of the smart in Canada (where the smart is equipped with a hypereconomical diesel) and I came to this conclusion: a smart fortwo achieves its purpose perfectly. It is not right for everybody, but for those whose lives can work with a smart, well… they won’t be disappointed.

Jim Press, the first non-Japanese member of the Toyota board; president of Toyota in North America; a Toyota employee since 1968, is moving to Chrysler. He’ll head up sales, marketing, and product strategy. Shocking.

Volvo will be displaying a C30-based concept at Frankfurt called the ReCharge. An electric motor in each wheel – that’d be four, altogether – team with a 1.6L four-cylinder engine to provide potentially all-electric motoring. The ReCharge can survive on battery power for 62 miles, but Volvo said that a typical 93 mile trip would use just 0.7 gallons of fuel. Recharging the ReCharge’s battery, which takes up space in the luggage compartment, would take three hours. Interesting. 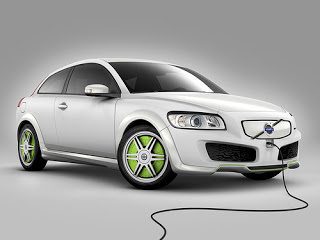