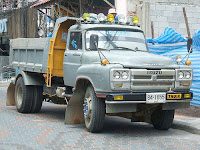 7,906 cars were sold by Isuzu in the United States last year.  That’s not enough to support the rebadging costs of the Chevrolet TrailBlazer and Colorado.

There isn’t enough commission earned off 7,906 Ascenders and i-Series’ to keep food on the tables of Isuzu sales consultants.  Ya know what? Companies who endeavor to pursue just 5000-10,000 American sales each year list their MSRP’s at double, triple, or even quadruple the MSRP’s shown on Isuzu windows.
What are we saying?  Isuzu is bowing out of the American market.  GM’s replacements are not suitable for Isuzu redo’s; Isuzu won’t be importing to or developing vehicles for their American dealers.  Speaking of dealers and other Isuzu “infrastructure” on the ground in the States, Isuzu will spend close to $40million to shut it all down.  Isuzu parts and service will continue in one form or another.
Sales dropped by a half from 2006 to 2007.  Worse than that, sales in the latter portion of the last decade were at least ten times stronger.  Isuzu commercial vehicle and diesel operations will continue to play a role in North America.  Check out The Good Car Guy’s Isuzu impressions, relfective of this outcome, back in August.
Fare thee well, Isuzu.  Unfortunately, a large percentage of potential buyers on this continent could never get hold of that s and z combo, but don’t play that name game.  The product didn’t catch. Let that be a lesson to the rest of y’all – Saab, Lincoln, Mercury, Mitsubishi, & Jaguar, especially.