BMW’s 3-series, the Audi A4, and Saab’s 9-3 are the main competitors in the entry-level luxury sport sedan-turned-convertible crowd. It was discovered recently that Infiniti wants its successful G coupe to be a member of the cabrio field. Don’t be surprised to see more power than its competitors at a lower price with similarly (or more) impressive dynamics.

There are no official pictures of this Infiniti G37 convertible…. yet. But there are renderings. And the rendering you’ll see elsewhere is likely a scanned across-the-fold image from a Japanese publication. The most active photoshopper I know took hold of a G37 and chopped. No California Customs job, this; but it does show the current generation in a likely configuration. Don’t be surprised to see the fairings remain as a part of the production model – don’t be surprised if they’re not. A G37 droptop with fairings would fit with its platform-sharer, the 350Z, while they are also more frequently used these days as aero aids and noise abaters.
Like it or loathe it, give credit where credit is due – to The Good Car Girl. 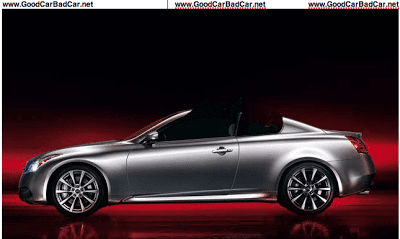