Although it’s only a half-lineup – lacking the jumbo SUV that is the QX56, the M35, M45 and all-wheel drive derivatives –  and though the Infiniti dealership network represents less than two dozen outlets, Infiniti is ready for Europe. Alive for two decades in other parts of the world, most notably North America, Infiniti’s most recent successes bode well for this European adventure, more of which you can read about here.

The lineup is pictured below. At its grandest, the FX50 is a wild and value-driven alternative to a Porsche Cayenne Turbo. The lesser-powered but still capable FX37 should do the trick for many buyers. The EX37 is a true crossover; stuck halfway between wagon and SUV. The G37 coupe and sedan are two of Infiniti’s strongest products, taking the fight to the German trio from Mercedes-Benz (C-Class), Audi (A4), and BMW (3-Series) quite ably.
Click here for all Infiniti-related posts from GoodCarBadCar.net
Three dealers in Switzerland, five in Spain, two in the Netherlands, five in Italy, and one each in Poland; Estonia; Belgium; Bulgaria; France; and Greece will serve potential customers. Many of whom, I might add, will be searching for diesels that they will not find. Problems establishing dealers in the UK will delay Infinitis’s launch there until 2009. 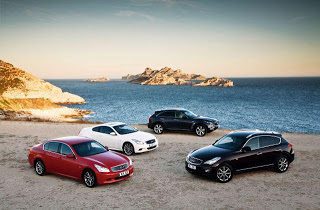