zda Premacy Hydrogen RE Hybrid. Talk about high-tech. No, really. Feel free to talk about it. Because when it comes to Renault/Dacia’s Logan, high-tech is a phrase you won’t hear often.

The Logan began its life as a way for Renault to delve deeper into emerging markets. A typical Logan rides a little high to cope with rougher roads. Its engine is capable of running on low-quality fuel. This car is designed to be built. Everything is fine-tuned to be cheap, but tough. Mirrors can swap sides and the dash is one individual piece. You’d need two Logan’s to equal the number of automobile parts required to build a more expensive Renault.

Logan’s are sometimes badged Renault, but also as Nissan; Dacia; Mahindra; and the Tondar. Compared with all this, the Logan eco² may appear distinctly high-tech. But this solution to the environmental problem we face is not nearly as revolutionary as what’s found in the aforementioned Mazda.

eco² will soon be a common sight to those of you in France, since Renault plans to affix it to deserving cars. Cars with extremely low emissions and a high level of recyclability when their life as transportation ends and they become a heap of metal. This version of the Logan will appear at Michelin’s Challenge Bibendum in Shanghai. How does it achieve a low 97g of CO2 per km?

Well, the internals of its 1.5L 4-cylinder turbodiesel are modified. Add to that a gearshift indicator that flashes when you should shift for maximum efficiency. Aero tweaks near the wheels, underbody, on the roof and on the trunk team up to lower the drag coefficient seven-tenths, to 0.29. Plus, 8% of the Logan’s plastics are derived from recyclables.

Both methods – that of Mazda and that of the Logan – appear feasible. One, the Logan, appears to be at least a short-term solution, if not longer. Subtly alter a car until it becomes a high-efficiency ecomobile. That’s not a bad idea. Or take Mazda, whose desire to align the eco train on tracks that lead to hydrogen & hybrids, joined together.

One way or another, Saturn Aura hybrids aren’t gonna cut it in light of (or in reflection of) Hummer H2’s and H3’s, don’t you think? 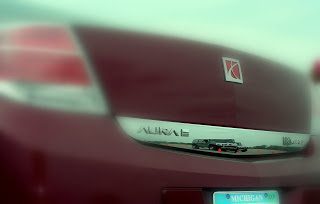