Before Hyundai gave us the Genesis, a Good 12 v2.0 winner, Korea was home to the Equus. While you think horse, you see the pictures in this post and you; yes you, are impressed. Middle-easterners may know this car as the Centennial. Styled very Lexus LS-like in its first generation, the current Equus looks like an amalgam of the LS, Genesis, and Benz S-Class. And guess what? Before the clock strikes 2011, North Americans will be able to purchase their very own Hyundai Equus.

Available elsewhere in V6 and V8 configurations, AutoWeek reports that we’ll be served the V8 only. Don’t be surprised if the engine is the 4.6L straight from the Genesis. However, the long-rumoured 5.0L Tau could find itself under the hood of the Equus, especially if Hyundai genuinely wants to position the Lexus LS-sized sedan as a “halo” car. Hyundai won’t be pushing numbers, after all. They want to impress us; they want to jack up the image of the brand so we think nothing of laying down cold, hard cash for a Genesis Coupe or Elantra Touring. Hyundai, Korea wishes us to know, is a serious automotive brand.
Indeed, with luxury befitting a Lexus LS460, Mercedes-Benz S-Class, BMW 7-Series, or Audi A8, the Equus will cost significantly more than the Genesis. Keep in mind, the Genesis fits in nicely with the Lexus GS, Benz E-Class, BMW 5-Series, or Audi A6 but is priced more like an IS, C-Class, 3-Series, or A4. Thus, this S-Class equivalent will be priced like an E-Class lest it fall into the trap of being judged by too lofty a standard.
Hyundai wants the U.S.-market Equus to fall under the $60,000 barrier. Features and capacity will match or exceed the aforementioned Lexus LS. 100 examples of the Equus can currently be seen at Hyundai dealers across America. For more pictures of the Equus and a traditional GoodCarBadCar 3 To Beat, click here. 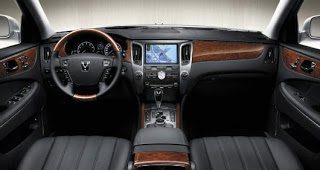