End-of-sentence expressions can dramatically change the whole meaning of the phrase in a way that the inattentive won’t even notice. Chucking in a qualifying statement such as, “for a ___”, strips the speaker of some credibility but, to a greater degree, disallows the verdict we all want to hear. An example, please: “You danced that waltz very well – nice lines; good extensions; enjoyable to watch – for a contemporary dancer, anyway.”

Huh? You’ve no idea what the judge really thinks. Likewise, for a few years from the late 90s into the early part of this decade, auto journos were consistently tacking on similar statements to Korean cars. “Quality is better than it used to be; the powertrain functions smoothly; and the price is right, making this a pretty good car considering the slanted H symbol on the grille.” Was it good or not?
Hyundai no longer needs such qualifying statements. No, not because we assume the car or SUV will be decent before it’s even driven but because after driving the Hyundai, we ought to realize that this is no longer a newborn company or a company that consumers fail to take seriously. For instance, the subject of this post recently reached a milestone that, if anything, exposes the Elantra as the worthy competitor it is – 3,000,000 sales say so.
To the drive, then. Hyundai hasn’t built a sports sedan. I say that with some seriousness despite the absence of sports sedan competitors for the Elantra or the lack of desire in the marketplace for a $13,625 sports sedan. See, were the compact car class (Honda Civic, Toyota Corolla, Mitsubishi Lancer, Ford Focus, Mazda 3 etc.) to be divided between sportier and not-so-sporty, it is all too true that the Civic, Mazda, and Mitsubishi would reside in the sportier division. Toyota’s Corolla would rest comfortably with its ilk, such as the Chevrolet Cobalt. The Elantra would join the second class. 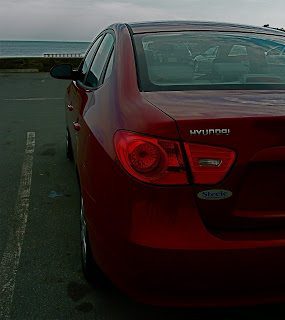 Oh…. don’t get your guard up, Elantra defenders. Hyundai has designed a remarkably comfortable car, not just to be in, but to drive. Handling is at least adequate. On city streets, steering is direct and ride quality is superb. Nevertheless, a certain squishiness starts to reveal itself that, on winding roads and higher speed corners, would be uncomfortable. It’s as though the Hyundai is suggesting through its responses, “Lay off a little, everything was fine a couple minutes ago.”
Indeed, everything is wonderful when the Hyundai is thrust into typical driving experiences. Don’t bother to imply that all its competitors cope as well with 4/10ths driving. Korean manufacturers (that’d pretty much be Hyundai and Kia; Daewoo sort of) aren’t exactly renowned for creating sporting machines, but the ride quality of the average Hyundai is excellent. Direct the Elantra towards potholes, bumps, yumps, and well-used roadways and this 4-door copes admirably. In fact, your passengers probably won’t even know the potholes, bumps, and yumps exist. Serene is one word that comes to mind. Calm, composed, unperturbed, unruffled – all apply.
So the Hyundai Elantra is the commuter’s dream and the twisty road lover’s nightmare. Apart from that, numerous positives begin appearing during a cursory Elantra glance. Trunk space is not only large but usefully shaped. Materials surrounding the cockpit are classy and of the right shades. Fit and finish is excellent – and no, we don’t mean excellent….. for a Hyundai. Buttons and knobs twist and turn crisply. Small cargo compartments pop up on the dash, in the dash, and around and between the driver and front passenger. Everything that should be within an easy reach is within easy reach.
Skeptical enthusiasts will be turned off by the Elantra negatives already mentioned, most of which revolve around the manner in which this Hyundai (and most Hyundais) respond when under duress. If fun-to-drive is your end goal, the Elantra won’t suppress your cravings. It’s that simple.
However, Hyundai has created a car that’s free of aggravation or annoyances. Lacking enthusiast qualities is relatively permissable under the circumstances Hyundai produces. Check out the basic MSRP for an American market Elantra: $13,625 includes power everything, ABS & EBD, and 138 horsepower. The up-level SE is a $16,325 car that adds stability control, 16″ alloys, cruise control, air-con, and a six-speaker stereo. Toyota’s Corolla starts at $15,250, produces six fewer horsepower (with better economy), and doesn’t allow sales personnel to use phrases like “power everything” unless option packages have been selected.
Oh, and Hyundai’s powertrain warranty covers 10 years or 100,000 miles. You might not love the Hyundai Elantra before you buy it. Like a successful arranged marriage, the love will grow.
For Canadian Hyundai Elantra info, follow this link. 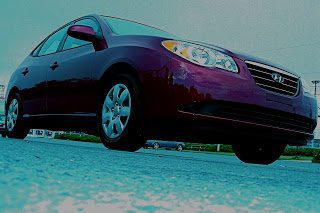