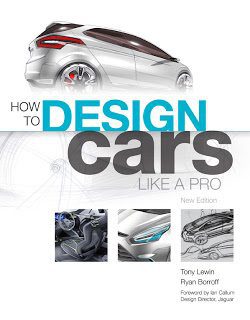 Review: How To Design Cars Like A Pro – Tony Lewin And Ryan Boroff

“What was once crashworthy is now dangerous,” Jaguar design chief Ian Callum writes in the foreword to How To Design Cars Like A Pro.  As an analysis on the state of automotive design in 2010, this statement is concise but profound. That said, this sentence isn’t representative of Callum’s self-promoting foreword. In fact, this sentence’s representativeness of the foreword is akin to how unrepresentative the book’s title is to its subject matter.

How Pro Designers Have Designed Cars would be more depictive. For the faintly automotive-interested, How To Design Cars Like A Pro is a terrific book to lay out on the coffee table. Picture and page quality is top notch. For the guy or gal who knows his shoulderline from his firewall, the book will hold his or her attention for hours. And for the person in between, the one who likes cars but won’t ever consider the designing of cars anything more than a doodling habit, How To Design Cars Like A Pro will be interesting, to say the least.

As for aspiring car designers, How To Design Cars Like A Pro is neither a textbook, a guide, or a cheat-sheet. General automotive enthusiasts, on the other hand, will love this book regardless of its out-of-context title; regardless of their career aspirations.

Criticism of the book’s mission taken care of, consider these ten reasons for buying this book as the perfect Christmas gift in 2010.

It’s professional. Written by two men in the know – Tony Lewin and Ryan Borroff – with working examples provided by Jaguar’s Ian Callum, Land Rover’s Oliver le Grice, the Royal College Of Art’s Dale Harrow, Peugeot-Citroen’s Jean-Pierre Ploue, Aston Martin’s Marek Reichman, Kia’s Preter Schreyer, Renault’s Anthony Lo, and BMW’s Adrian von Hooydonk, the new edition of How To Design Cars Like A Pro has the sort of brain you’d find in a hockey book in which contributors ranged from Sidney Crosby to Alex Ovechkin, Martin Brodeur, and Shea Webber. This isn’t a rinky-dink little colouring book put together for 7-year-old boys who know that Pontiac’s dead but have never heard of Oldsmobile.

It’s educational. Although it’s doubtful that you’ll complete the book, put it on the shelf, and start working for Ford Motor Company and J Mays in Detroit next week, there’s plenty to learn from de Grace’s week-long diary of a designer’s life. “Last thing today,” he says, “we are meeting to discuss new design tools for the studio. This means computer software mainly, not pens and pencils these days.”

It’s current. How To Design Cars Like A Pro was first published as a completely different book in 2003. Remember, concepts in 2003 included the Dodge Kahuna and the Mercedes-Benz Vision CLS. Today’s Chrysler minivans look nothing like the Kahuna and the 2011 Mercedes-Benz CLS-Class has already outdated the Vision CLS. Thus, a new book was required. Sure, there’s plenty of looking back – even decades back – but the design world has moved on, and so has the new edition How To Design Cars Like A Pro.

It’s realistic. Seven pages are devoted to the Volkswagen Golf. Not everyone cares how the angles play with light on the latest French supercar concept.

It’s opinionated. Of the 1991 Golf Mk3, the writers are clear that “it represented a serious lapse of form for VW and is the only generation of Golf not regarded with affection by enthusiasts.”

It’s practical. Though not enough, 14-17 pages are given over to tuturials by Allan Macdonald.

It’s historical. Style, a factor at play when you dressed for work this morning and even in the food you’ll eat at a fancy restaurant this evening, must look back if it is ever to look forward. How To Design Cars Like A Pro takes a look at Harley Earl, Battista Farina, Bruno Sacco, and…. golly, Chris Bangle. There’s even a section on right ideas introduced at the wrong time. Audi A2, anyone?