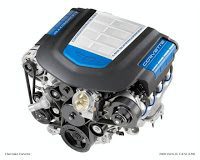 USD pricing has been announced for the ultimate General Motors vehicle. Chevrolet’s Corvette ZR1 has been locked in at $103,300. However, every buyer is going to pay another $1,700 for the gas guzzler tax. Beyond that, some customers will choose chrome wheels at $2,000. Apart from that, options appear limited to a massive package. $10,000 nets you improved seats, better stereo, navi, and more cowhide.

For the purpose of this comparison, forget the options that limit the price of the Chevrolet Corvette ZR1 to $105,000. Position the Corvette Z06, basic Corvette, Nissan GT-R, Porsche 911 GT3, and the least expensive Chevrolet in America alongside. In the USA, those cars are priced at $72,125; $46,950; $69,850; $107,500; and $10,895, respectively. The Numbers you’ll want to understand the horsepower/$ quotient for these cars are listed below.
Don’t ignore the fact that there’s plenty more involved in producing a performance car than placing a huge engine under the hood. Chevrolet engineered many significant improvements into the Z06 version of the Corvette before even more significant changes to the ZR1. Horsepower is only one element.
—–