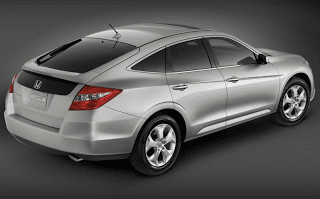 Looking back on the good ol’ days of domestic dominance in the automotive industry, some analysts point to certain global economic and manufacturing factors as the reason behind the Big Three’s market share. Those in the know suggest that GM’s supremacy; Ford’s control; and Chrysler’s command of North America had much more to do with product – good product.

What led to their collective downfall? Why, the lack of good product of course. Don’t shout anything from the mountaintop relative to GoodCarBadCar.net and the demise of Honda (the world’s largest proprietor of internal combustion engines), but let this still be said: one would think Honda could have learned from these historical events and not produced something as calamitous as this Honda Accord Crosstour you see here.
Is the Civic about to lose its crown as the best-selling car in Canada? Not likely. Will the Accord still sit at the top of the heap with Toyota’s Camry as the best-selling cars in the USA? Rest assured. Is the CR-V suddenly not the best-selling SUV in America? Last I checked, CR-Vs still sold like popsicles on a hot summer day in Toronto. Nevertheless, this Accord Crosstour is ugly enough to do three things.
Firstly, vehicles this ugly run the risk of appearing in The Bad 8 or The Bad 8 Supersize. After that, the Accord Crosstour is unattractive to the point where customers will struggle to see its merits as one of the best sedans but with more space. Finally, the Accord Crosstour is so misshapen and disfigured that it could hurt the image of the other vehicles in Honda’s showrooms.
And I ain’t joking.