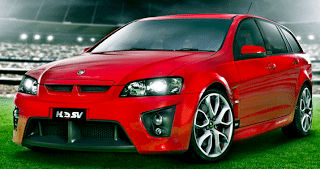 Holden is an Australian subsidiary of General Motors. Down under, they enjoy a big rear-wheel drive car with a big engine about as much as is deemed possible. HSV is Holden Special Vehicles, the Holden equivalent of Mercedes-Benz AMG or BMW’s M cars.
With that being understood, you can look at this HSV Clubsport R8 Tourer and not be surprised by its horsepower total (425) or its torque figure (406 lb-ft). There’ll be just 125 of these wagons. A manual transmission is standard equipment.
20″ wheels are standard on the sedan in the rear of the photo below. Holden calls it the HSV Senator Signature SV08. It’s close to $15,000 more than the previously-mentioned Clubsport R8 Tourer. Only 20 can be had with a manual transmission. Another 30 will be available for those who wish the car to shift for itself.
Finally, in the foreground, you have the HSV GTS 40 Years Edition. Anniversary models are all around us. There’ll be 100 of these at a slightly lower cost than the Senator Signature.
How does this pertain to you? These cars, underneath all the extra badging and two-tone paint jobs, are Pontiac G8s.