Upon Ford’s pronouncement of planned production, the first-generation Ford Focus RS was eagerly anticipated and rapidly snapped up. The UK was an especially lucrative market for the original hardcore model and, of course, North Americans were left out of the negotiations. No Focus RS landed on our shores.

The second-generation has been en developpement for what seems like an eternity to the RS cognoscenti. The story is strikingly similar this time ’round. The Focus is a very different car outside of North America; the RS is based on that car, and again; it won’t be coming here. Not only that, but development of the first Focus RS lasted for a dog’s age and Ford managed to make good on the extra time spent – at least in most areas.

Ford loves to place the Focus RS at the head of the pack, at least in terms of pushing power through the front wheels. A substantial amount of extra horsepower will be forced through the two wheels responsible for steering this time; just as it was when 212 or so bhp struggled mightily on wet surfaces a few years ago. The difference? The new Focus RS’ 276bhp (with 295 lb-ft of torque from a turbocharged 2.5L turbocharged five-cylinder) meanders its way from engine to the front end in a car that already capably handles 222 horsepower in the Focus ST. That’s good news.
On another front, pictures have finally been revealed. Menacing, angry, overt, audacious – whatever you call it, the new Ford Focus RS ain’t shy. 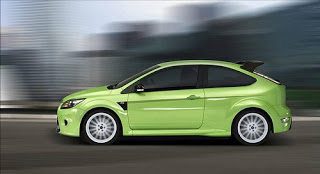