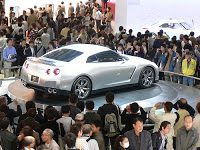 With Nissan GT-R prices in Japan starting at the equivalent of about £34,000, Brits are wondering why on earth they’d buy an officially imported example from Nissan. The GT-R will likely cost over £60K in old Blighty, and after importing costs, a Japanese example wouldn’t cost you much more than £45,000 or so.

What does Nissan UK have to say? Well, not only must Britons wait till 2009 for their first GT-R’s to arrive; not only will they pay through the nose for the AWD, turbocharged V6 911-competitor, not only will they have but 300 to divide amongst themselves each year, but they must also wait for its high-dollar arrival because of the grey-import’s poor radio reception.

Aha. We all knew that each and every buyer of Nissan’s ultimate halo car was purchasing for one reason and one reason only: terrific AM/FM stability. Losing out on such a necessary feature (in a car that reaches 60mph in 3.5seconds and tops out on the exciting side of 190mph thanks to 473 horsepower) would be an incalculable loss.