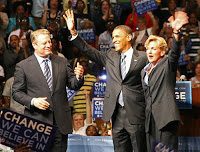 Shared background of the Governor of Michigan and The Good Car Guy: Canadian birth, Norwegian ancestry, childhood in America. Considering Gov. Jennifer Granholm’s nation of birth, it is unfortunate that she’s unaware of Canada’s significance in the oil consumption of the United States. Apart from that and some straight-up exaggeration on the whole plug-in hybrid phenomenon (General Motors calls the Volt an electric car with a range extender), Gov. Granholm’s op-ed piece on CNN.com is more than interesting. It’s a must read.

Earlier today, CNN’s media partner at Time offered up some Numbers on what the automotive bailout consists of…. potentially. Gov. Granholm offers up some more. The most-telling fact Granholm uses to make her position is that “U.S. automakers buy more U.S.-made steel, aluminum, iron, copper, plastics, rubber, electronics, and computer chips than almost any other company”.