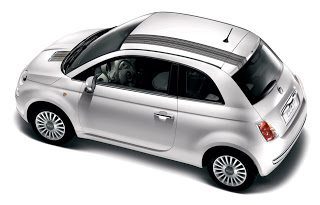 When talk of the Fiat 500’s arrival in North America was discussed in the light of a $20,000 MSRP, GoodCarBadCar.net’s interest was keen yet limited. Strip 40% off that price – a price that didn’t make sense in the first place – and Fiat is offering North America a sporty, seductive, and supremely stylish hatchback alternative to cars like the suddenly less exciting European-derived Ford Fiesta and Mazda 2.

It seems unlikely that the Fiat Cinquecento, as it’s called in Torino, will be able to rain on the Mini Cooper’s parade as a cut-price Italian rival. Because of pricing and power, the Fiat and Mini seem now to play in their own respective niches. It may be true that Mini stole some of Fiat’s thunder a decade ago, but the Fiat’s ability to compete as a true economy car, not just as a premium small car, should secure legions of buyers. How, and why?

Handsome as an Armani suit, as classy as Versace eyewear, and as flashy as a Gucci clutch, the Fiat 500 is distinctly Italian yet egalitarian in a way no Lamborghini, Ferrari, or Maserati has ever been. The original (and better-looking) Cinquecento was the Italian version of the Volkswagen Beetle: a car of the people. Like that Volkswagen and the original Issigonis-designed Mini and the 1964.5 Ford Mustang, the Fiat 500 repudiated class barriers and became a chic addition in the driveways of the rich and famous as well as the reliant and friendless.

The new Fiat 500 hasn’t taken over Europe nor will it become a Camry-rival in America. But beyond its historical significance and appealing style, the Fiat 500 is a tremendous car to drive. You and your friends will sit comfortably in a shockingly roomy and tastefully decorated interior with plenty of features and loads of accessories. Style will not require sacrifice.

Sales Stats: As of this scribbling, Fiat hasn’t sold any 500s in North America, so there aren’t any Sales Stats available. Fiat wants to sell 50,000 500s annually in the United States. Sales of the more expensive Mini Cooper should be around 50,000 in the United States this year; about 4500 in Canada. Mini sells a convertible and Clubman wagon version of the Cooper as well as performance versions of all three.