This, my friends, is an unofficial declaration of General Motors’ new slogan, in addition to admitting its Barack Obama-derivation: “Crossover Options You Can Believe In”. GM certainly believes in Lambda.

Lambda isn’t just the 11th letter in the Greek alphabet. GM has taken that letter and applied it to their midsize crossover platform. This platform/architecture/foundation has found its way under four vehicles. GM has options. Believe it.
To keep it brief, The Good Car Guy is going to reign in his wordiness to one sentence per vehicle. Add their manufacturer links and MSRPs from the American market. Although suitably differentiated, these four CUVs are identical under the skin. It’s difficult to rank the quartet in terms of anything but personal preference.

BUICK ENCLAVE: Stunningly beautiful but its heaviness (obviously similar to the other three) leads to a fuel guzzling nature which, when combined with its expense, makes the Enclave an expensive proposition for the latter part of this decade.  $33,995 – $38,190 – Buick.com/Enclave
CHEVROLET TRAVERSE: Its recently revealed price proves to be the value Lambda leader; already possessing the mass-market appeal that Chevrolet produces automatically in addition to more power than its mates. $28,990 – $32,995(GCBC est.) – Chevrolet.com/Traverse

GMC ACADIA: “Professional Grade” advertising seems silly when applied to a vehicle, however tough, that is so truly similar to a Buick and Saturn; though the GMC brand as a whole seems somewhat lacking in an anit-truck buying year. $30,470 – $39,015 – GMC.com/Acadia
SATURN OUTLOOK: Ask why if you like, but GM is sticking with this import-fighter; leading you to also ask if the other three Lambdas are intended to battle only the Dodge Journey and Ford Edge. $29,360 – $33,370 – Saturn.com/Outlook 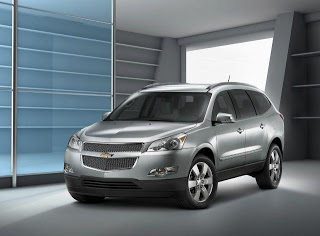