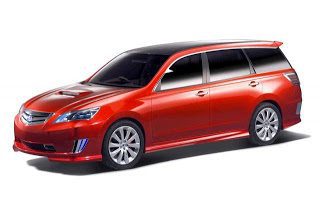 Joining Toyota’s Venza in the tall wagon/midsize crossover/urban utility vehicle crowd will be – officially, ya’here – Subaru’s Exiga. It’s hard to classify this type of transportation, but take it as the modern reincarnation of Grand Marquis and Caprice wagons. Ford’s Taurus X and the Chrysler Pacifica are recent domestic alternatives that haven’t succeeded.

Toyota and Fuji Heavy Industries, a company in which Toyota holds stakes, will attempt to take the competition to a higher playing field. The Venza and Exiga debuted as concepts with dinner plates representative of their nameplates. Toyota shows an economical 4-cylinder and 268bhp V6 from the Camry, while the Subaru featured all-wheel drive and a turbocharged boxer-four.

Both flatter the large family with seating in three rows. Both provide lofty driving positions, something ex-SUV drivers don’t like to let go. Indeed, fuel economy for both would theoretically improve when contrasted with their SUVesque brethren; vehicles like the Tribeca, Highlander and 4Runner. Albeit, complaints are beginning to surface that these supposed car-like crossovers aren’t always the efficient runabouts their EPA numbers suggest. Even the Venza and Exiga make use of huge frontal areas, which, despite possibly decent drag coefficients, won’t help economy. 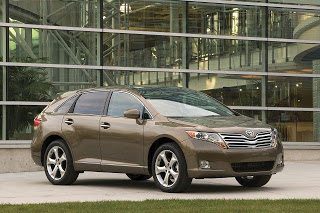 Compromise is the true point of the Exiga and Venza. Not as heavy as a large SUV; but almost as capable. Not as car-like or efficient as a small wagon; but tall and practical like a large SUV. Whether you get the point or not; Toyota and Subaru suspect enough buyers will.