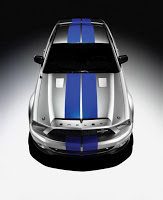 Suggested pricing for collectables are just that – suggestions. The Antiques Roadshow experts aren’t saying you will receive $10,000 for your grandmother’s vase; they simply suggest that $10,000 would be an appropriate price. Then again, they aren’t saying you won’t receive $14,000, either.

In the case of the Ford Motor Company and the biggest and baddest variation of its most famed current car, the Mustang, the manufacturer’s suggested retail price is, again, a suggestion. Some consumers will use it as a guide price. Other potential buyers will consider it more suggestive.
Ford won’t build many more than 1,700 GT500KRs over the next two model years. The supercharged 5.4L V8 funnels 540 horsepower and nearly that much torque through a 6-speed manual to the rear wheels. Although the $80,000 final price may disgust you, dealers could well tack on thousands and thousands more depending on demand. With just 1,000 Ford Shelby GT500KRs hitting the road in 2008, demand could be high.
To be honest, $80,000 is rounding up. The GT500KR is a $79,995 car once destination and the dreaded gas-guzzler tax are levied. It would take an even more substantial downturn in the already worsening U.S. economy for the 1,000 cars to maintain a presence on dealer lots…. but, the $80K sticker makes the GT500KR a perfect candidate for a $$$ or 3 To Beat feature.