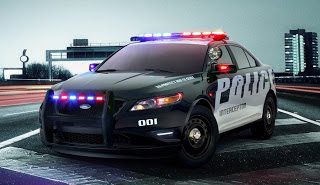 NEXT FORD POLICE CAR WILL BE THE TAURUS INTERCEPTOR

After extensive speculation, some of which was seen here on GoodCarBadCar.net, Ford has announced that the Crown Victoria Police Interceptor will give way to the Ford Taurus Police Interceptor. Production of the Crown Vic Interceptor ends was previously forecasted to end in September of 2011, just as production of the Taurus Interceptor begins. As a pursuit vehicle, the Ford Taurus Interceptor will likely be fitted with the same engines as the road car, a 263-bhp 3.5L V6 and a twin-turbocharged 3.5L V6 with more than 100 extra horsepower.

Upgrades on the standard car are necessary. Think brakes (upsized), cooling (heavy-duty alternator and larger radiator), and interior fitments (removed lower seat bolster, vinyl rear seats set back a notch, and anti-stab plates).
Here’s the good news: the Ford Taurus is a very attractive car with a very roomy cockpit which handles and powers forward like a much smaller – albeit still big – automobile. The bad news? Well, a large number of police officers want the sturdiness of a body-on-frame vehicle, a vehicle with frame rails, something like a truck. The Ford Taurus Police Interceptor is as unibody as they come, Ocifer Pete. 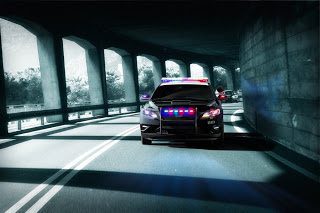 And now for the ambivalent news, which isn’t actually news at all but a series of questions directed at the masses, including The Good Car Guy. Why is it that we care so much about a car with which we hope to have no personal contact? How is it that we label certain cop cars “cool” and other cop cars “boring” when we desire never to see its flashing lights in our rearview mirrors? In what country was this fascination with police pursuit vehicles first developed? Finally, is this just the Cops & Robbers in our boyish hearts playing itself out in adult life?
By the way, if you’re actually one of those robbers, you might want to take note of the slightly smaller rear seat compartment. Compared with a Ford Crown Victoria Interceptor, the Taurus Interceptor loses 1.6 inches of legroom, a tenth of an inch in headroom, nearly three inches in hiproom, and more than three inches in shoulder room. Now more than ever, don’t flinch when Constable Kenny holds down your head as you find your way into the most unfortunate vehicle-bound position on the planet… with your hands behind your back. 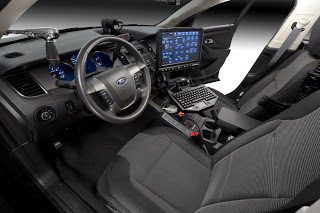 For FBI special agents, state troopers, city cops, the RCMP, provincial police forces, and countless other organizations who previously spent much on the Ford Crown Victoria Interceptor, you will be much more comfortable in this much more modern vehicle. Losing three-tenths of an inch in headroom won’t be bothersome up front. Sacrificing less than an inch of legroom won’t be catastrophic either. It won’t be as difficult to justify skipping the gym since shoulder space in the Taurus is ever so slightly narrower – no need to be over-bulked. However, with hiproom falling from 57.1 inches to 56.3 inches, be advised that doughnut counts out to fall by at least one a day.
Improvements in fuel economy are to be expected. Trunk space goes from humongously gigantic in the Crown Victoria to just barely shy of humongously gigantic in the Taurus. Fortunately, all these little sacrifices realized on interior capaciousness stem from downsizing outside. Ford’s Taurus Interceptor is almost ten inches shorter from bumper-to-bumper and about an inch narrower than the Crown Victoria, too. That’ll be nice when parking at Tim Hortons and Krispy Kreme…. and careening through alleyways when chasing perps in Mitsubishi Lancer Evolutions.
If the Ford Taurus Interceptor is available as a front-wheel drive sedan, police chiefs can predict fuel economy based on the EPA’s rating of 18 city mpg and 28 highway. All-wheel drive Taurus Interceptors, if made available with the 3.5L and all-wheel drive are rated at 17/25, same as the EcoBoost-powered Ford Taurus. Ford Crown Victoria Police Interceptors were rated at 15/23 mpg by the EPA.
Related From GoodCarBadCar.net
Ford Taurus SEL AWD Driven
GM Hops Back Into Police Arena With Chevrolet Caprice
Ford Explorer Police Interceptor Utility Vehicle Gallery
Will The 2011 Ford Police Interceptor Be A Falcon Or Taurus?
GCBC Gallery Of The 2010 Ford Taurus
Lamborghini Gallardo LP560-4 Polizia