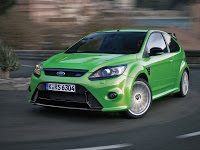 Despite the absence of the new RS version of the Ford Focus on roads in North America (or its targeted markets, for that matter), I’m already getting sick of the lizard green that all the images centre on. Realizing that the Ford Focus RS won’t be a frequent site in my life, I’m getting over it. Considering that pre-orders are full of the very same colour, I’d better. To help, some blue pictures have arrived.

With all the advance marketing prep and hype and furtherance of same online by bloggers and anybody who cares about fast Fords with historical implications, one would assume we already knew everything there was to know. Ah… no. Final details for the 2010 Ford Focus RS are ready and are available in Numbers form below. For those of you who can’t come to grips with Ford’s obvious decision to market the Focus RS everywhere but in its home market (after all, this is an Across The Pond post), you ought to click here to read about stuff you can own.

24,995 – price, in British £ sterling, of the new Ford Focus RS, converting directly to $35,708 USD but more likely under $32.5K were it ever to be offered in the United States in mass production
235/35 – width and profile of the Focus RS tires, rather wide for a small car and very slim at the same time
25 – average U.S. mpg of the new Ford Focus RS based on the EU combined cycle
3,234 – weight, in pounds, of the front-wheel drive Ford Focus RS

5.9 – Ford’s estimate of the time it will take for the new Focus RS to reach 62mph from a standing start
163 – top speed, measured in miles per hour, of the new Focus RS
324 – torque, measured in lb-ft, of the 2.5L turbocharged five-cylinder under the hood of the Ford Focus RS
300 – horsepower generated by the turbocharged 2.5L
4,501 – total iterations of the previous-generated Ford Focus RS built at the Saarloius plant in Germany