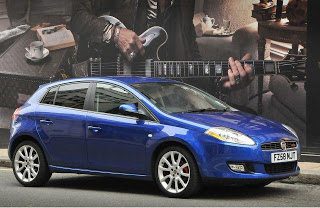 FINDING THE PRICE OF THE FIAT BRAVO IN NORTH AMERICA

Amidst talk of a government-forced merger between Chrysler and General Motors, the advancement of the Chrysler-Fiat link has, frankly, been forgotten. Not at GoodCarBadCar.net, however, and most certainly not in the mind of The Good Car Father. His Fiat memories inflict quality concerns but also confidence in Italian charisma.

Of all the Fiats offered to European consumers, some are distinctly unlikely possibilities for North America; at least with their current configurations. If Chrysler wants to shore up small car sales, the Doblo; Qubo; Ulysse; and Multipla.
No, the Multipla wouldn’t make it into the theoretical Chrysler/Dodge/Jeep/Fiat showroom of March ’09. The Multipla appears to be a great Kia Rondo/Mazda 5 competitor; but its ugliness precludes it from North American consideration. North America would be confused by the Qubo in spite of its “endless versatility” and offended by the Doblo as anything but a commercial alternative to the upcoming Ford Transit Connect. Meanwhile, the Ulysse’s largesse doesn’t possess corresponding desirability.

On the other hand, the Sedici is already here as the Suzuki SX4. The Idea, 500, Grande Punto, and Panda all seem like worthy options while the Punto, 600, and some other still-produced-but-long-since-rejected models wouldn’t muster the strength required.
In the middle sits Fiat’s European family car entries. The Croma, Linea, and Bravo battle the ubiquitous Volkswagen Golf (Rabbit) and Ford Focus in Europe, two cars that are shaped in ways we know not of. The Golf Plus, for instance, is a loftier and roomier Golf that we’ve never been offered as a Rabbit Plus. Also, the Focus C-Max is Toyota Matrix-like; a good-looking and fine-driving machine that goes un-offered on our side of the Atlantic. Fiat’s Linea would be thrust up against the Honda Civic and Toyota Corolla in two countries where the Civic and Corolla, along with the Mazda 3, dominate best-sellers lists. That leaves the Bravo.

Ah, the Bravo. evo says this is a car that “isn’t going to send hot hatch drivers running for cover, but it’s particularly chirpy and very likeable indeed”. Top Gear: “The Bravo rides well, proving to have struck a great balance between handling and compliance. It’s also far better sorted in the cabin than Fiats gone by, but the rear is cramped.” Finally, CAR: ” On broken rural roads in northern Italy, the Bravo felt tough, rattle-free, and more like a Foden than a Fiat.” In other words, the Fiat Bravo has a reputation to kill even in Europe when it comes to durability, but as a new car, the Bravo is a worthy foe for the European Ford Focus hatchback, the Volkswagen Gabbit, Honda’s very sharp Civic hatchback, and unique vehicles like the Citroen C4 and Renault Megane.
Although it strikes one as being doubtful, the probability of the Fiat Bravo being offered in North America revolves around price and power; cost and cylinders; expenditures and engines. Simply switching currency from £ or € to USD is pointless – the variables are endless. Apart from that is the issue of equipment/engine configuration. North Americans would expect fuel efficiency from a Fiat via Chrysler incursion, but not at the expense of expected power levels. That pegs potential Bravo engines for North America as the largest available engines offered by Fiat in Euro-market Bravos. The problem, as one might foresee, is that Europeans view this type of car as a family vehicle. Equipment levels are high; higher than we expect. There’s no point in suggesting that the Fiat Bravo Sport 2.0 16v Multijet 165 is the one for us just because it’s powerful. Nor could you convince those responsible that the Fiat Bravo Active 1.4 TJet 120 is the car because it’s of the lower trim variety.
So we’ll take the broad view. In the United Kingdom, the Bravo has a starting price of just £10,750. Yes, that is “just” £10,750 despite its exchange to $15,068 in the States. See, another car we know, the Saturn Astra, is sold in the UK with a starting price of $£12,555, equal to about $17,500 in USD. Saturn sells a car not equal to but nicer than that base Vauxhall for $16,495. You dig?
Usually, equivalent vehicles are sold in the United States for less than the anticipated MSRP which was based on currency exchange. Moreover, right about now, customers in the UK are paying less for cars than European mainlanders. We still can’t assume that Fiat would sell a Bravo for $13,500-$14,500 simply because Saturn sells an Astra $16.5K, however.
No, for that we need to make educated guesses regarding the makeup of a potential North American Fiat Bravo. With 150 horsepower and 152 lb-ft of torque and would achieve somewhere around 27 mpg in the city. At £14,950 well-equipped or £13,700 as an attractive base MSRP, the Bravo would likely sell in America for $16,500 or $19,500, a little bit more than a Honda Civic at the low end but a little bit less than a Civic at the high end. Chrysler wouldn’t want to let the Bravo sell for any more than $24,000 in Canada but would start with a very low base price – with less equipment, so Canadians could see $16,500 as well.
Scarcely believable? The Good Car Guy agrees. But as a pricing scheme showing what could be done by one of Fiat’s larger cars, imagine the potential value in something small like the Fiat Panda.