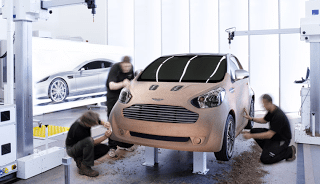 FERRARI, ROLLS-ROYCE & ASTON MARTIN ARE ALL MANUFACTURERS OF SMALL CARS?

In a fight to be seen as both eco-conscious and economically aware, automakers which traditionally sell cars priced in the stratosphere are bringing their badges down to our level.

Aston Martin will be applying its grimacing grille to the front end of the Toyota iQ. They’ll call it the Aston Martin Cygnet; they’ll lux it up a fair bit; and they’ll double the price.
Ferrari, meanwhile, will stick its badges on the 695 Tributo Ferrari, a hopped-up version of the Fiat 500. At least the Fiat 500 695 Tributo Ferrari will be significantly quicker than the regular 500, something that can’t be said of the Cygnet.
Finally we have Rolls-Royce. The manufacturer of Phantoms and Drophead Coupes will soon be known as a custom outfitter of Mini Coopers. Mini Rolls will supposedly look just like regular Minis but inside – oh yes, inside – Rolls will have its way with high-end materials. Perhaps an umbrellla in the door, too?

Obviously the connection between Fiat and Ferrari is obvious. Fiat owns 85% of the autonomously-run supercar producer. Mini and Rolls-Royce are both owned by Germany-based BMW. But the Aston Martin/Toyota relationship is a curious one. Regardless, all three of the high-dollar brands will be endlessly criticized for degrading their brand values.
If part of what makes the Ferrari 458 Italia so special is its exclusivity, doesn’t a commonplace Fiat 500 Tributo lessen that joy?
Consider the outrageous prices Rolls-Royce clients justify as a result of uncommon leather-lined seating and permanently upright wheelhub badges. Do you really want to pay so much more for the privilege when Mini customers receive some of the same treatments?
Meanwhile Aston Martin isn’t simply badging Toyota iQs with logos from Gaydon. No, Aston is changing the whole look of the car. So the same company which builds the V8 Vantage, DB9, Rapide, and DBS will sell city cars?
However, there will be an unseemly amount of short term gain. Why else would Ferrari, Rolls-Royce, and Aston Martin participate in such a scheme? Businesses are on this planet to generate profits. Peering through the long-term tunnel to see the negative impacts come 2016 is not an easy procedure. In terms of these increasingly common small car ventures, it’s a procedure to which certain supercar manufacturers are unwilling to submit.