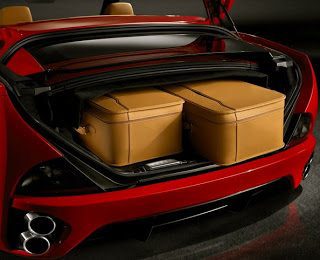 Ferrari has released a photo of a trunk-filled California, the Italian company’s new four-seat hardtop convertible. The Good Car Guy just showed pictures of the apparently useable rear seat but in this case, Ferrari appears to have been making somebody else’s case.

Hardtop convertibles are known for lacking a useful trunk. By the time the top is squeezed into the rear of the car, space for luggage and groceries is typically limited because the top ate into that space. This is why on a bright summer’s day when you most expect convertible owners to be enjoying the open air, they’re cruising down the interstate with the top up. If they don’t do that, they don’t take their luggage.

Well, Ferrari proves the point in a picture where the luggage isn’t fully inside the trunk. It’s as if they’re saying, “Oops, guess we can’t fit all this stuff in there, can we? Take the picture anyway, Giacomo.” As you can see in the image, the Ferrari California’s top is not in place but instead, is resting on top of the trunk. The luggage is covered in the same leather as the golf bag and suitcases that Ferrari previously placed in the rear seat; quite clearly fitted Ferrari kit. With that being obvious, the irony is even more humourous. Ferrari can’t even fit California-specific bags in the trunk of the California?
Ach, I know it was just for the sake of display in the same way pictures of women in the front seat usually show them with one leg out of the car. But it’s still funny, and still ironic.