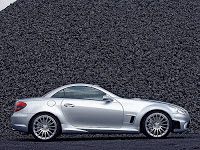 FAST FACTS FROM THE CAR WORLD

Mercedes-Benz smallest coupe/convertible, the SLK, is available with

a few different engines. The most extreme example of the SLK hardtop convertible is called the Black Series, and under that banner the car loses its retractable roof. And 100 pounds. The news: Horsepower is now a pleasantly round 4-0-0. A car this small with 400 horsepower (competitor Porsche Cayman S has ‘only’ 295 bhp) is capable of reaching 60 mph in a smidge over 4 seconds…..

Democratic presidential candidate John Edwards spoke out to SUV drivers – hopefully just those drivers who abstain from towing and off-roading – yesterday in Florida. He believes Americans are willing to sacrifice, and wants one of those sacrifices to be sport-utility vehicles. “We are the worst polluter on the planet,” the former senator said. “America’s going to have to change.” He’s right. Were he to becom

e the president, would he insist the Secret Service sell off their Suburbans? We’re unlikely to find out…..

Who is George Hotz? Yeah, the dude who hacked – or reverse-engineered – Apple’s iPhone. George made the iPhone compatible with cellular companies other than AT&T. When selling the phone he hacked, George wrote that he wanted to make money to put the engine back into his Mitsubishi 3000GT. Instead, now famous/infamous George Hotz has the keys to a brand new Nissan 350Z…..

The drag coefficient of the next-gen Audi A4 is a slippery 0.27. With China now being a large executive car market, the A4 will be built in China starting next year….. Toyota has decided that its Australian Camry, the Aurion, will compete with hot versions of local Ford’s and GM’s. The Holden Commodore and Ford Falcon have forever been linked to stinkin’ fast versions. Now Toyota is using its TRD brand (a true sub-brand down under) to release a supercharged Aurion. 323 horsepower and 295 lb-ft of torque are believed to make this the most powerful production front-driver in the world. A Camry? An odd bunch, those Aussies…..

Earth’s most beautiful sedan, Maserati’s Quattroporte, has again gone under the knife. This time doctors from Brembo and Pirelli joined the Maser’ physicians to create an even more impressive Q’Porte. The car will be named the GT-S, feature upgraded Brembo brakes and a new Pirelli foursome on a set of dark chromed dubs. Maserati dropped the ride height while the fancy adjustable Skyhook suspension is dropped for fixed springs and shocks. It’ll be expensive…..

In Pebble Beach, California, one of the world’s most prestigous Concours d’Elegance recently finished. At the auction, a 1959 Ferrari 250 GT LWB California Spyder sold for $4,950,000. That car finished 5th at Le Mans in 1959…..

Honda’s new Accord features an optional V6, half a litre larger than the old Accord V6 with two.5 dozen extra horses, but the new Accord V6 is 3mpg better on the highway. Thank technical advances and the ability to run on six, four, or three cylinders….. 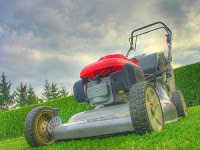 Speaking of Honda and engines, the world’s preemindent engine producer has tentative plans to sell a 3.5 litre V6 diesel in the USA by 2010. Honda wants the engine to be legal in all 50 states, but unlike the likely four-cylinder diesel we’ll see in the next Accord, this V6 would be visible in the bays of Odysseys, Pilots, and Ridgelines…..

Oh, and speaking of Honda and engines: Honda has always been an effective advertiser. I just saw these lines in an American car magazine: “At the last two Indy 500s, our record was 66 and 0. For the 2nd year running, Honda engines have powered every race car at the Indy 500. That’s 66 high-performance engines racing at full speed for nearly 25,000 miles in all. And for the 2nd year in a row, there wasn’t a single engine-related problem in the race….” That is effective marketing…..

In top-speed runs around Ford’s Arizona Proving Grounds, a Dodge Viper guzzles at a sickening rate – 4.9mpg. To attain the same 254mph as Bugatti’s Veyron would require the Viper V10 to produce 1100 horsepower. Or you could make it 49.7% more aerodynamic. A Corvette Z06 would need a greater aerodynamic gain, but could get by with 1032 horsepower. Then you’d have to take into account cooling issues and stability problems, all of which have been sorted in the Bugatti. One problem reveals another, and it’s very likely that an 1100 horsepower Viper would not touch 254 mph. Theoretically, it works. Practically; probably not…..

Germany’s foremost producer of sports cars has already built over 100,000 current generation (997) Porsche 911’s. Russia and China aren’t taking as many as you’d think. The Russians and Chinese want Cayennes because they are better vehicles in which to be chauffeured…..

Italy wants Fiat 500’s so badly that Fiat may be forced to postpone launch in other countries.In case you hadn’t heard, at the July 4th launch of the 500, a thousand of the old 500’s gathered in Turin. Curiously, this oh-so-Italian small car is not built in Turin but in Tychy. That’d be Poland for you geographically challenged folk. Youthful Fiat CEO Luca de Meo was told upon accepting that job that he must make the Trepiuno concept into the 500. By whom? His mother….. 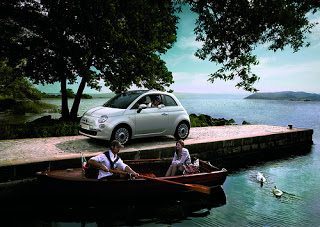 In celebration of Ferrari’s 60th anniversary, Panerai is producing 60 rose gold or steel watches that’ll indicate the correct date until the year of our Lord 2100 A.D. Subject to your winding, that is. The cost, at least in the UK, is £23,400. Hmph, I don’t even wear a watch. So I don’t want one…..