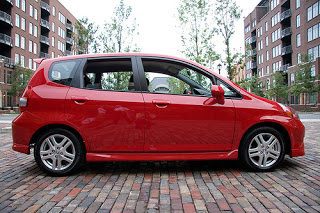 Many car makers have turned the vehicle name-making process into an apparent lottery of meaningless alphanumeric titles. On many counts, at least the numeric part means something, but even that is not true across the board. It goes from “LR3” to “550i” and on to more silly concoctions like “SLK55 AMG”. These three names apply to magnificent

vehicles, but with these titles being used in such a widespread fashion, non-enthusiasts are finding it hard to keep it all straight.

Where am I going with this? Think back to the 80’s and 90’s, when automobile names sometimes even represented the characteristics of the car on which the badge hung. Integra. Sure, it’s not much of a genuine English word, but those small Acura’s truly were full of structural and mechanical integrity. The title, as carried by the greatness of the car, held quite a bit of sway in the young-tuner crowd.

Discovery. That’s about as close as you can come to accurately naming a Land Rover. You could discover places where nobody knew there were places if you were in a tough, old Disco.

Now, I know, the names weren’t always representative. An Acura Legend, however solid and luxurious, will not be participating at the Pebble Beach Concours in 2050. Legendary, er, not quite.

But many times, the naming process truly resulted in a great end result. Now to my point; the new Honda Fit. In some places, as you may know, this vehicle is actually called the Jazz. These are generally places where the Fit is not equipped with a 109 bhp engine which propels the small Honda quite briskly due to the light weight and overall small stature of this tidy hatchback.

See what I’m getting at? “Fit” is a perfect title for a car that has managed to keep the percentage of fat down and also worked out in Honda’s laboratory enough to garner a few compliments about being quick and agile.

Sure, the Fit is a lightweight contender, but it brings to the ring a strong chin, some ability to throw the big knockout punch, and tenacity to go in and out of corners. Honda’s Fit starts at just under $15K CDN, but at that price is not amazingly well-equipped. That’s not to say a Fit DX is bare-bones; but to simply suggest there ain’t as many bones when you only spend $15,000. The Fit I was interested in was the LX, which for bare-bones Civic pricing offers a lot of stuff. CD, air-con, power locks, mirrors, and windows will satisfy most people at this price level, and safety features are abundant across the Fit spec chart. Up the price to over $19,000 and you’re inching your way deep into Civic territory, but you do get a lot of extras. An extensive body kit, bigger wheels and tires, paddle shifters upon choosing an automatic tranny, six speakers, cruise, and keyless entry all conspire to make the Fit Sport look and feel like a good purchase.

Despite being in the same price realm as low-level Civic’s, cargo capacity and flexibility make up for the fact that you didn’t purchase Canada’s best seller. With the Fit being a real city car, I decided to take my drive at hours when my city behaves like a big and busy city.

I left Honda’s parking lot in the middle of a sunny Friday. Fit’s haven’t been around for long, and this produced some curious onlookers. I took my typical route up through a hilly section of town, with the specific hill I love on being the only place where the Fit did not seem so fit, at least cardiovascularly). Low-speed corners are abundant and some rough patches all confirmed that the little Honda drives much more like a big car, but only when you want big-car feel. On the other hand, its smallness was the overriding trait when testing the turning circle on a cul-de-sac and shifting through the 5-speed with typical small-car, small-engine feel.

Put another way, the Fit felt like an Accord when I judged ride, but like a Civic when I judged handling. Sitting in the backseat again felt like a big-car, but visibility out through the rear window proved to me that my rear window wasn’t too far away, a’tall. I was never intimidated by 18-wheelers on the highway, but reversing into a parking spot was remarkably easy. Bothersome behaviour was not to be found. The clutch was mounted too high for my liking, but still operated in typically smooth Honda fashion. The C-pillar combines with the front seat headrests to block vision slightly. Buttons and switches were all of quality not normally found in cars as inexpensive as this. Fuel economy from the 1.5L inline-4 is expected to be impressive, and as already stated, a 1.5L never felt so zippy.

Small cars are the new big thing in North America, led by the Mini Cooper and the smart fortwo here in Canada. Alphanumerics have fortunately not yet taken over the tiny-car segment.