Much has happened in the automotive world over the last nine days. That which GoodCarBadCar hasn’t reported on but now deems necessary to is available to you now, with 1/3rd of November 2007 behind us.

McLaren the victim? The FIA has called Renault to the witness stand, suggesting that, Renault had “possession of documents and confidential information belonging to Vodafone McLaren Mercedes, including details of the McLaren [fueling] system, gear assembly, oil-cooling system, hydraulic control system and a novel suspension component used by the 2006 and 2007 McLaren F1 cars.” In other words, FIA thinks Renault spied on McLaren. McLaren-Mercedes was fined $100,000,000 for spying on Ferrari.

Could the same conglomeration soon be building the Indigo (above)
and a vehicle for the Queen, the Range Rover? 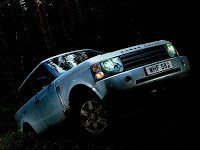 ACR, three letters used by Dodge over the last decade or more to describe a ridiculously vicious specimen of Viper. The latest edition will have distinct appeal to the core Viper buyership. To be honest, it looks a tad awful. (Can awful be just a tad?)

Skoda was seen testing the next Superb in Death Valley, California. Don’t expect Skoda’s to come on sale in your local North American VW dealership anytime soon. You’re welcome to buy more expensive versions of the Czech vehicles. We see them as Rabbit’s, Jetta’s, and Passat’s.

“We have decided not to sell it,” said who? Alan Mulally. What’s he talking about? Volvo. Phew… that’s good news.

Gilbarco Veeder-Root and Google team up. Google wants you to search for directions to your next destination as your pumping gas, so collaborating with Gilbarco, a fuel pump manufacturer, seems a good plan. Men – and women – who insisted on staying silent in front of the gas attendant when lost will soon be able to do so, at 3500 pumps across the USA, and still be able to figure out a route. If they can read a map. On a screen. While filling up with regular, midgrade, or premium.

Indian automaker Tata, which is attempting to build a sub-$3,000 car before long, could well pay Ford Motor Company $2billion for a combined deal of Jaguar and Land Rover. Ford paid $1.9billion for Land Rover early in the millenium and spent $2.5billion on Jaguar 11 years prior.

Toyota made $4billion in the last quarter. GM lost $39billion in that third quarter. The numbers are slightly misleading. Root through the mess at Edmunds.com. It’s so ironic that Chrysler’s owners also own 51% of GMAC, General Motors’ own financial arm.