Pre-forgive any accidental absences from this list. Members of the Volkswagen Group, from Volkswagen itself through Audi; Seat; and Bugatti, have made good use of their Direct Shift Gearbox. The DSG has gone by more than one name, but complaints are few and far between.

If you’re transmission is capable of being shifted manually by paddles or automatically and can do so with lightning speed (gear 2 is pre-selected when gear 1 is in use; gear 3 when gear 2 is in use and so on), it’s easy to figure that…. hey, we’re on to something.
Mitsubishi and Nissan have used performance cars to aid their jump onto the bandwagon with the Lancer Evolution X and GT-R. And despite the fact that one of the planet’s most famous inexpensive performance cars makes use of a DSG (VW GTI), ignoring the fact that one of the world’s most visually stunning automobiles uses a DSG (Audi TT), forgetting that the Evo and GT-R are Japanese performance icons and shift with the benefit of dual clutches, and disregarding the Bugatti Veyron and its ridiculous speed; expense; and power – it is Porsche that takes technology and propels it into the mainstream knowledge base.
Statistics help; even if price and volume should pair to keep Porsche-used tech out of the limelight. Around Germany’s famed Nurburgring, Porsche’s 911 Carrera S takes the twists and turns eight seconds quicker with their PDK than it will with a manual trans (7:50 plays 7:58). Increased power helps the regular Carrera S exceed the previous car’s ‘Ring time by four seconds, as well. The Porsche Doppelkupplung transmission replaces the Tiptronic automatic and shifts its seven speeds 60% faster while also providing better fuel efficiency than the manual-trans equipped 911s. 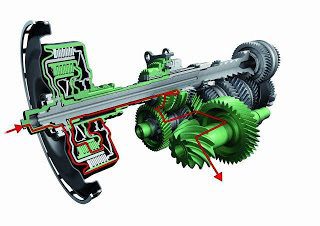