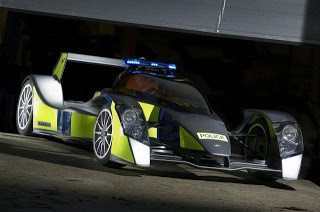 “DON’T EVEN TRY IT, MISTER”

You’ve seen the Caparo T1 on GoodCarBadCar before. The Good Car Guy entitled it the combination of an insect and supercar. That which is lacking is that which makes it beautiful.

The British highway police seem to agree. They certainly understand its capability: amazing acceleration, fearsome top speed, and roadholding unlike any non-racer in history. And I dare say, the police livery may suit it better than any other paint scheme seen thus far. A total recant of the Top 5 Cars Police Should Be Driving is written here. Our roads should be full of Caparo T1’s, not least because their identification in rearview mirrors and windshields would be easy as pie.