DODGE WEBSITES PROVE TO BE TRICKSTERS

Struck down at the last second.  Garbage.  Thinking I had a terrific post warming up in the oven; one that Canadians would latch onto like Winnipegers to NHL franchise news; Dodge pulled “destination fees” from out of the closet and the grand title – “Journey Prices Separated By Just $10.00 in North America” – went down the tubes.

Dodge.com displays the Journey’s base MSRP on their main page as $19,985.  This is the four-cylinder, front-wheel drive SE Journey, keep in mind.  Now, when you arrive at the build page, you discover that the $19,985 includes the destination charge.  A Dodge Journey SE costs $19,360 but the tab jumps $625 on the order sheet.
Dodge.ca, on the other hand, displays the Journey’s price on their main page as $19,995.  (Read this to understand my shock and awe.) Considering the normal price disparity between U.S. and Canadian prices; the anger that wells up inside people which have a stronger dollar but are denied prices any where close to parity…. well, this was going to be big news.  Only a $10 gap.
Alas, it ain’t true.  It isn’t even close to true.  Dig a little deeper. Delve into the build section of Dodge.ca. Discover that, unlike Dodge’s American division, Dodge Canada does not include the destination charge. In fact, Dodge.ca makes very clear that the destination charge on this side of the border is more than twice as much. 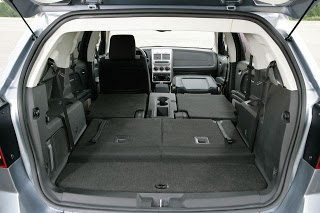 Now add that $1,300 charge to the $19,995, add $100 for the A/C excise tax, and you’ve got yourself a Dodge Journey SE that costs $1,410 more than its American equivalent, not $10.00 more.  There may be some content, equipment, and detail changes within that gap, but you can understand The Good Car Guy’s disappointment.
Canadian Journeys with front-wheel drive go from that basic SE up to a $24,995 SXT to a $27,995 R/T.  All-wheel drive Journeys are SXT and  R/T only and cost $27,595 and $29,995, respectively.  Tack $1,300 on top of each MSRP.
Meanwhile, sending power to the front wheels only on American Journeys ratchets the SE price up $3,000 on the SXT all the way to $26,545 on the R/T.  (Only Journeys with the SE tag are powered by a four-cylinder/four-speed automatic tandem – other models are V6/6-speed autos.)  Choosing AWD in the USofA is again exclusively held as a choice for the SXT and R/T.  $25,530 proffers the SXT; $28,295 the R/T.
Incentivizing has already struck the Journey, something The Good Car Guy warned about in his first Journey-related post back in September. Thousand-dollar “cash allowances” are subtracted from every Journey MSRP on Dodge.com.