Truck sales are dwindling. Which two companies does this transition hurt the most? That’d be Chrysler and Ford; two manufacturers who are facing some pressing financial concerns.

So who debuts new trucks in Detroit at the North American International Auto Show? That’d be Chrysler and Ford; two manufacturers who produce relatively impressive pickups but need to stay on top of the game to maintain their lofty sales totals.

Check out AmericanTrucks.com and their
large selection of Ford Truck Bed Covers

Dodge Ram debut factoid: 115 head of cattle were present for the introduction, suggesting most strongly that the ‘personal transportation truck’ may be slip-slidin’ away, but the ‘work truck’ is still necessary.

The ’09 Ford F150, America’s best-selling vehicle for… forever, is not as “all-new” as the Ram but does sport some toughening, both underneath and skin-deep. 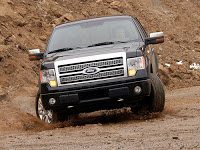 F150 debut factoid: Toby Keith joined Mark Fields in the F150 as it drove on stage.