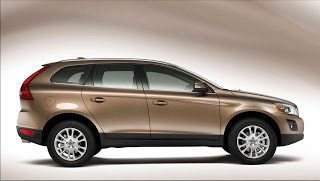 “It’s not only the safest Volvo ever, if you ask me, it’s also the most stunning. Not a bad combination, is it?”

So asks the President and CEO of Volvo Cars, Fredrik Arp.  Volvo is very excited about their small crossover. True enough, the best-selling Volvo at my local dealer is a tall wagon, the XC70.  Volvo considers this sector to currently be the world’s toughest and fastest-growing.  Entering the combat arena, the XC60 battles with what Volvo calls “unmistakeable, capable Volvo XC muscles” and flowing lines that create the “sporty charisma of a coupe”.

OK.  It’s also viewed as an obvious next-choice for C30 buyers, which does make plenty of sense.  The XC60 also makes use of City Safety.  “…a unique feature that can help the driver avoid or reduce the effects of low-speed impacts common in city and stop-and-go highway traffic. If the sensors in the XC60 detect that a collision is imminent and the driver does not react, the brakes are engaged automatically.”  That sounds very useful, very irritating, and clearly reeks of Volvo’s theory (knowledge?) that the typical human is a sucky driver.
Although appearances can be deceiving and though beauty is in the eye of the beholder – I am not deceived and I am the beholder.  Volvo is not an historic builder of beautiful vehicles.  Exterior design has quickly become a vital secondary selling point for Volvo since the debut of the first-gen S80 and S60.  Is the XC60 weaken my knees?  Not so much.  Is it good-looking?  Most definitely.
281 horsepower from a turbocharged straight-six should impress plenty of buyers, including those who were turned off by an initially weak base engine when the XC90 debuted years ago.  Volvo hopes to sell 50,000 XC60’s annually across the planet.  Fuel prices, carbon taxes, emissions legislation, and social pressure should contribute to the XC60’s success.  Perhaps upgrades from the C30 are not quite as likely as XC90 downgrades.