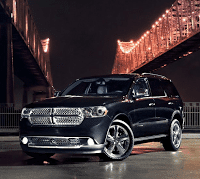 Chrysler, or someone working for Chrysler, must know that King Solomon said a good name is rather to be chosen than great riches. It’s all in a name, another saying goes. Yet numerous automakers avoid names altogether and stick with alphanumeric combinations intended to connote something they usually don’t. Compare “Honda Accord” – and all that it stands for – with “Mercedes-Benz CLS550”, a car that’s fitted with a turbocharged 4.6L V8, not the 5.5L engine its name indicates.

Ford once chose a different path, naming their big car the Five Hundred, careful not to make it the Ford 500. Whatever.

Model suffixes are almost always a mishmash of letters and numbers. There’s the 2011 Hyundai Sonata 2.0T, a tell-tale sign that the car uses a 2.0L turbocharged 4-cylinder. Then again, you can also have a 2010 Hyundai Elantra GLS. GLS? Gargantuan Luxury Sedan? Er, no.

Of recent, Chrysler and Dodge have been actively looking for new ways to name their cars and specific trim lines. It’s becoming a bit annoying. We’ll start with a short history lesson after the jump.

In the mid-90s, Chrysler Corporation was trading on the NYSE as “C” and the company worked by itself, for itself. The company’s new midsize cars weren’t very good. To be frank, the Chrysler Cirrus, Chrysler Sebring coupe, Dodge Stratus, Dodge Avenger coupe, and Plymouth Breeze were bad cars. Their interiors were punishing, made with sub-par materials with sub-par engineering. The engines were harsh-sounding, the transmissions were clunky, the seats were uncomfortable. They were not famously reliable. Compared with other mid-90s midsize sedans, the Chrysler products managed to look alright. A couple generations came and went. There was some tie-in with Mitsubishi and obviously a change of ownership to Mercedes-Benz and then Cerberus and eventually Fiat. Chrysler dropped the Cirrus name. Dodge lost the Stratus name. Plymouth just up and died. The 2001 Chrysler Sebring Coupe actually had a really lovely roofline. All in all, these were not class-competitive cars.

In the United States in 2009, for instance, there were 27,460 Chrysler Sebrings sold. In the whole calendar year. Dodge only sold 38,922 Avengers. These numbers represent 62% and 37% drops from 2008 levels, respectively. Require ye context? The Ford Fusion, by no means America’s best-selling midsize car, posted a sales increase of 22.4% to 180,671 in 2009. Was it a tough year for Chrysler? Sure, but then again, almost every year people give Chrysler excuses for bankruptcy this, ownership change that. Chrysler, whether the company is under German or Italian management, is a company designed to sell cars. Judging by the figures from 2009, Chrysler and Dodge weren’t selling enough.

Forgive the digression to Sales Stats. Fortunately, Fiat wants to restore Chrysler’s health. New interiors are found in the Jeep Wrangler, Dodge Charger and Grand Caravan, and in the company’s newerish sedans. The all-new 2011 Jeep Grand Cherokee has helped grow overall Jeep brand sales in leaps and bounds. Since Fiat-run Chrysler and Dodge were willing to spend some money to improve the company’s Camry/Accord competitors, why not tinker with more than just the interiors? Indeed, there are new engines and slightly restyled exteriors. And to get back to the topic of this post, there are also new names.

The 2011 Chrysler 200 replaces what would’ve been the 2011 Chrysler Sebring. Since the car is a bit better, Chrysler decided to help people forget about the antiquated and unloved Sebring. In the span of 15 years, Chrysler’s midsize sedan has now had three names: Cirrus, Sebring, 200. This is exciting, right? New engines, new interior, rejigged face. It makes you wonder what Dodge named the outgoing Avenger’s replacement, right?

Yeah, keep wondering. Apparently Fiat-run Chrysler and Dodge believes consumers identified the Sebring name with badness but not the Avenger name. So the rejigged Dodge midsize sedan keeps on with the same name. Huh? North American car buyers didn’t really like these cars in the first place, began turning their backs on these cars in 2009, and haven’t really accepted them in 2010. This is enough to make Chrysler think the Sebring name should go, but not enough to boot the Avenger name, too. Strange, but true.

Before we consider the fact that Dodge is maintaining the Durango name, consider a few more facts about the 2011 Chrysler 200 and 2011 Dodge Avenger. These are not all-new cars. If…. if sales double in 2011, think nothing of it. If Chrysler doubles midsize volume in March 2011, total volume will still be under 15,000, enough to make the duo seventh among midsize sedans, the exact same position they held in March 2010.

Back in Durango naming offices, ya gotta wonder. The Durango and its Chrysler Aspen were killed in late 2008. North America didn’t love big SUVs as much as they once did, the theory went, and they certainly didn’t love the Durango or Aspen. Nevertheless, development was underway when Chrysler was still a part of Mercedes-Benz, development that resulted in the excellent 2011 Jeep Grand Cherokee and the aggressively-designed (and likely excellent also) 2011 Dodge Durango. Once again, there’s this naming procedure conundrum. It looks like Chrysler/Dodge/Jeep want to rid themselves of names that fail to resonate positively with customers, thus the 200 replaces the Sebring. But the Avenger and Durango are either maintained or returned, despite very recent dismay reflected their way.

It worked for the 2010 Chevrolet Camaro. Earlier in the decade, the Ford Mustang was the only pony car buyers would consider. Yet a completely new design revitalized the Camaro. But did the Durango name ever hold as much sway as the Camaro? No, not even close. As for the kitted-out 2011 Dodge Durango Citadel, that’s a lot of name for one SUV to handle. Besides, how much does Chrysler plan to pay in royalties to The Good Car Guy’s hometown for naming rights?

Looking back on this sort of thing 20 years later, some critics aren’t sure car names really matter. Can the word “Camry” really lure in 25,000+ American buyers every month? How did “Suburban” become associated with cul-de-sacs and gigantic SUVs? Is the Edsel name even one bit responsible for the downfall of Edsel? Mazda’s smallest North American car is the 2 – wouldn’t it be better to be #1?  A childhood friend once told me his father’s car was better than my dad’s car because his Pontiac was a 6000; our Audi was just a 5000.  Do names matter? Can names matter?

Legions of consumers won’t buy a Ford Taurus, no matter its spaciousness or good looks, because it’s a Taurus. Others prefer to buy it because it says Taurus, not Five Hundred. The Good Car Girl admits the 2011 Buick Regal is likely one of the best-looking sedans currently in production, but even if she was in the market for a car of that size and price, there’s no way the Buick Regal would be on her shortlist. Not only is it a Buick, it’s also a Regal. There are surely some potential Maserati Quattroporte customers who would avoid it if the Italian was translated on the back. Maserati Fourdoor, seriously? Notice how Ferrari chose Italy as the namesake for its latest mid-engined V8 2-seater: Ferrari 458 Azerbaijan didn’t have the same ring to it as Ferrari 458 Italia.

Yes, names matter. While the 2011 Chrysler 200 may not be a bad car, it isn’t possible to call a car so indelibly and obviously linked with the Chrysler Sebring a good car. The 2010 Dodge Avenger wasn’t pretty, the 2011 model hasn’t changed much, and its link to the 2010 is as obvious as a hammer to the head. The naming process behind the 200 isn’t problematic because of deceit (although it kind of is forgivably deceitful) but because the next-generation all-new 20-whatever Chrysler 200 will be let down by the fact that the first Chrysler 200, the 2011 model, was basically just an improved Chrysler Sebring.

At the same time, the 2011 Dodge Avenger naming process is problematic because, well, it goes against what Fiat-run Chrysler/Dodge is trying to accomplish with the Avenger’s freakin’ platform-mate. You’d think they’d at least follow their own advice. As for the new Dodge Durango, it’s hard to say. Dodge would surely be better served by giving the Durango a new name – La Femme, anyone? – but the Durango name may not be as harmful to this SUV as renaming the next Chrysler 300C the LeBaron.