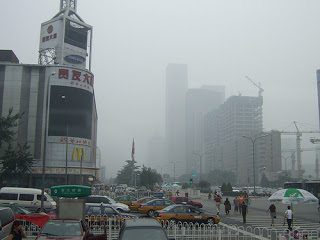 Attempts on Saturday to de-smog, just for a day, by 100 of China’s largest metropolitan areas was a complete and utter failure. In advance of the 2008 Beijing Olympics, a campaign started to make September 22nd car-free.

Take the bus. Walk, or better yet, ride your old bicycle. The thing is; the act of and the persons participating in cycling, China’s main mode of transportation not many years past, have been struck by the status-conscious. People who can afford automobiles and thence drive their new Buick’s everywhere make life difficult for people who have stuck with their bicycles. Some roads are even restricted: cars only.

With 1,000 new auto registrations every day in Beijing alone, car-free day was not an easy campaign to win. And win it did not. Traffic was reported as normal (heavy) and most streets were running at typical levels. But how does this relate to Beijing’08?

IOC prez Jacques Rogge declared in August, just a year in advance of the opening ceremonies, that scheduling could be a problem. Some events may be postponed on days when air quality is too poor.