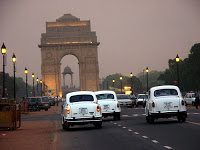 “So let’s sell them some cars”, said General Motors. Sell they have, and sell they will. General Motors has been very successful in China. Since its 1994 arrival in India, GM has invested over $750 million into building and selling cars. GM head-honcho Rick Wagoner believes that, of all the growth in the automotive industry in the next 10 years, Asia will account for 70%. India and China have flourishing economies despite their other troubles (poverty and high urban migration, for two) and General Motors desire to put a stake in India, like they did in China, is a good desire to have.

GM wants to meet a lot of their India-based manufacturing needs by tapping into India’s parts-suppliers. In addition to that, GM would gladly enhance their global operations using the same methodology. Wagoner means, “Cheap labour is good for us.” Except he’s American, so he’d say, “Cheap labor is good for us.”

GM does not stand alone. A fair approximation would say that since the end of 2005, Nissan, Fiat, Honda, and GM have a combined $1.5 billion invested in the Indian market. India produces about 1.4 million cars a year now, but by 2008 (next year), that number could double. There are multitudes of sales forecasts available to read, but it is doubtful that the market will fail to meet even the lower predictors. If Tata produces a $2,500 car (4-door, 33 horsepower), the growth could be exponential.

Delphi, Visteon, and Magna are ramping up India-based parts manufacturing operations. The oft-maligned Indian carmakers are now having their small-car expertise studied by foreign makers. To see how good the cars are? Not so much. To see how they can build so cheaply? Yes. Then balance the cheapness with the prior knowledge of high quality. India has a highly qualified workforce. Find engineer(s), pay $25/hour, have new car chassis design. Consider it done.

Even with GM’s recent announcement, India will only rank third on GM’s list of Asian hubs. China and South Korea (GM Daewoo) each do at least 700,000 vehicles annually for the General.