CHEVROLET TO SWITCH WTCC CAR FROM LACETTI TO CRUZE

In parts of the world where the World Touring Car Championship is more than just an obscure motorsport seen by a few in the middle of the night on the web (yes, I’m talking to you… us, North America), viewers are watching the 2008 season seeing Chevrolet in third place in the team championships. They don’t use a Corvette or Malibu or Silverado. The Chevrolet team in the WTCC uses a Chevrolet Lacetti.

To those in Canada, think Chevrolet Optra, Optra5, and Optra wagon. For those careful automotive watchers in America, think Suzuki Forenza and Reno. Yes, they turn it into a race car. And it does alright.
Next year, if the trio of Chevrolet drivers remains the same (Nicola Larini, Robert Huff, Alain Menu, Manabu Orido) they can expect to be driving the WTCC version of the Chevrolet Cruze. (See pictures and info on the Cruze here and here)
The Cruze will make its debut in Brazil where the two Seat Leon diesels won this season. Testing has already begun on the Cruze WTCC. In business terms, positioning the Cruze in the WTCC has much to do with what you can read about in the first Cruze link above. In 2009, for an American vehicle to be taken seriously on the world stage, motorsport really helps. Competition for the Lacetti in 2008 has included the Volvo C30, numerous BMW 3-Series sedans, Honda’s European Accord, two varieties of the aforementioned Seat Leon, and the Lada 110. 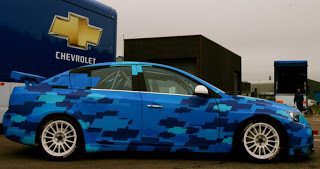