Excellent fuel economy alone is not enough to secure buyers. If only one demand was made by the collective consumer world, we’d all be riding bicycles and burning calories.

Chevrolet has been selling plenty of Cobalts this year. Most manufacturers are seeing gains in their small car sales and the good news for General Motors (and Ford; with the Focus) is improving sales of aging models. What can be better than cars that have paid off their maker’s investment and sell better than ever? Umm… I don’t know.
Again, we want more than fuel efficiency. After 1083.9 kilometres (673.5 miles) in a 2008 Chevrolet Cobalt equipped with a 2.2-litre four-cylinder and an automatic transmission, The Good Car Guy exceeded the Environmental Protection Agency’s highway mpg rating and during one sting (Cape North, Nova Scotia to Baddeck to Halifax, Nova Scotia) matched the department of  Natural Resources Canada’s highway rating. 33 miles per gallon is an excellent statistic – more about which you can read at AutoEnergy – but a figure that numerous cars exceed by a significant measure.

Thus, the Cobalt needs more. For a brief rundown, click here for Part 1 of the Cobalt series. Since you’re into learning more, keep reading.
Chevrolet offers multiple small car options in Canada. Along with the Cobalt sedan and coupe, HHR retro wagon, GM also commissions Chevrolet to sell the Aveo hatch and sedan after formerly commandeering the Suzuki/Daewoo Reno and Forenza to sell as the Chevrolet Optra. General Motors is not the last great bastion of small car hope and until the Cobalt is replaced with the Cruze, GM won’t be competitive with the Japanese greats from Toyota and Honda. That is, if the Cruze is great.
Strangely but not surprisingly, GoodCarBadCar is completely averse to declaring the Cobalt good or bad. Decent in almost every way, the Cobalt is an attractive purchase at a discounted price but never when the monthly payment matches what your local Honda dealership will offer with the Civic.
For starters, perceived quality – the feel of the car in areas you can see, touch, smell, and hear allowing you to calculate what build quality may be like in areas you can’t see, touch, smell or hear – is not a Cobalt positive. Switches, buttons, knobs and surfaces are either excellent or terrible. Blinker noise, a seriously subliminal but effective selling point, is hi-lux. The materials covering the instrument binnacle looks and feels like something out of a ’97 Cavalier.
Finding a comfortable driving position was easy. With three days of heavy driving across from the capital of Nova Scotia to the northern section surrounding Cape Breton’s national park and back to Halifax, comfort would be a major factor. The driver was fine. Rear passengers happened to be alright, as well, but only because of a short front passenger and one rear passenger being a toddler. Front-left seat height adjustment functioned nicely in terms of aiding comfort. However, comfort couldn’t overcome a massive A-pillar that posed numerous problems on sharp downhill left turns. 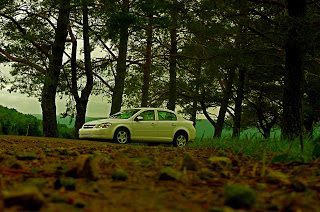 Unfortunately for the small Chevy, the Cabot Trail prides itself on exposing every fault. Ride quality was superb despite the noise during pothole exit that would lead you to believe the suspension was being realigned. Chanelling its inner turbocharged SS, this base Cobalt limits body roll but takes its set awkwardly. While it feels like the Cobalt wants you to drive slower, grip isn’t actually that low. Communication via the steering column is basically nonexistent although the effort weights up in typical General Motors fashion…. only better.
Accelerating out of small look-off parking areas back onto the Cabot Trail without being able to see what kind of gigantic RV is about to take corners to the right or the left is fun in a “how ’bout a game of chicken?” kind of way. The Cobalt copes.
Then cometh a hill. Maybe its only a slight incline. Perhaps that’s not a hill but a perfectly level two-lane with an overtaking option. We’re spitting along at just 80km/h (around 50mph) but there’s no way the Cobalt wants to attempt that pass. Partly in order to achieve terrific fuel economy and partly out of what we’ll have to call poor engineering, the Cobalt’s 4-speed automatic hates downshifting and doesn’t find much in reserve. True it may be that the 5-speed manual would suit better in a low-powered car like this, all 148 horsepower (upgrading to 155 in 2009 with slightly improved efficiency) don’t arrive until 5,600 rpm and must haul 2,780 pounds as well as driver and passengers.
You can figure it out. Chevrolet sells one sports car, the Corvette; large utility vehicles and pickups; a stylish retro coupe, the Camaro, and some very decent cars. The Aveo disappoints. The Malibu is stylish and high-class. The Cobalt?
Pure, unadulterated transportation. Not much more and not much less. 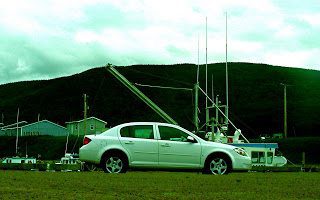